The Worst Road in Kenya

The journey from Nairobi to Kenya is a fascinating one.

The beginning of the day was filled with unruly roundabouts. Each one presents it’s own new challenge. The only similarity between this roundabout and the next one is the complete lack of rules as to how they are to be navigated.

Give way to right. What’s that? Not a rule known in Kenya.

The bigger your vehicle, the more likely you’ll get through the roundabout unscathed. Unless you’re riding one of the million plus motorcycles in the city. If that’s you, just weave in and out and around, over and under, any potential setback - be it a parked vehicle with people huddled around it’s exposed smoking engine or a transport vehicle barrelling through the roundabout using all the lanes. Just hang on, shut your eyes and ride like you’ll live another day. And, you just might.

Before leaving Nairobi, Leon pulled over at a petrol station. “I accidentally left a few litres of oil here. I purchased it yesterday before picking you up at the airport but forgot to take it.” Not wanting to be late picking us up, they decided to stop back on the way out of town today.

Pulling into the crowded petrol station, the manager came rushing out to our Toyota Prado and approached the driver-side window before Leon could even get out. Leon opened the door to the words, “You left your oil. I have it in the shop waiting for you.”

Leon got out and followed the man into the shop. A few minutes later, the oil stored in the back, Leon was driving once again. “Kenya has a lot of people who want to take you for a ride.” Leon said, “The Muzungu is a big target to the dishonest person. But, time after time, we meet the good ones. I thanked him for being a godly man. He told me he believes in God and tries to do the right thing by all people.”

Leon laughed. “The white man. That’s what they call us. Muzungu.”

We drove in silence for some time. We passed carts loaded high with wheat, charcoal and other products. Each cart was ridden by one or two men and pulled by anywhere from one to three donkeys. The road was littered with speed humps. Originally built to slow people down, they have become the best place for one roadside shop after the next - each with just one or two products. 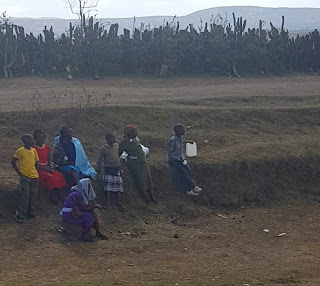 The humps are so steep, the vehicle comes nearly to a stop at each unless you don’t notice one and then you are launched into the ceiling and given a reminder to keep a wary eye for the next. So, the roadside shops are a welcome reminder: Slow down, speed kills - or gives you a massive headache, at the least.

Later, descending along the side of a large escarpment, Leon said, “That’s the Great Rift Valley.”

The mountain dropped away dramatically on the left side (my side) of the vehicle and I stared out into the abyss of ancient Africa. The chasm between rolling hills and occasional mounds gave evidence of prehistoric volcanic action. Leon pulled over and said, “Well stop here for a look. They will try to sell you things. You can buy if you wish.”

Stepping out of the vehicle, the ground fell away just a few metres away. A rickety wooden overlook invited the brave traveller to step out in faith. Made from old pieces of rough hewn timber, you could see through the many large cracks to the plummeting depths below. My trust in the make shift landing fell even further when I saw a sign at its far end. The sign said, “The World Trade Center.”

Finally, I dared the few steps required to get out to the railing - just to prove to myself that I was a manly man. Proof gained, I retreated hastily to solid ground and leaned in a manly fashion against the bull bar of our rugged Toyota Prado. We were a tough brave pair, waiting patiently for the rest of the group. I was guarding the Prado and it was defining me - a silent statement of solidarity and security in numbers.

While holding the bull bar in place, I was approached by a man with a basket of trinkets and treasure. He kept handing me things and speaking in broken english. “Just $500,” he was saying with each trinket he handed me. I dutifully took everything handed to me. When I had four of the big five - made from petrified wood, my new salesman friend pulled out a paper bag and offered to package my purchase for me.

I had said a number of polite things during the interaction - all attempting to imply I was not purchasing today. Finally, As the bag was being filled, I said, “I don’t want to buy anything!”

The man looked shocked, took the trinkets from my hand and said, in his best english yet, “Fine!” Dropping the trinkets into his basket he shuffled away to the next unwilling customer.

Back in the car, we began comparing currencies. Everything is in Kenya Shillings (Ksh) and, after doing some crazy hard maths - for my word-driven mind - we realised that one shilling is one US cent. So, those trinkets had been $5US each.

When we reached the next big town we pulled over to buy food supplies, have lunch and purchase SIM cards for Courtney and I. After waiting for a good 45 minutes, it was our turn. We were amazed when we both walked out of the Safaricom shop - with 3 gigs of Data, 50 minutes of talk time - having spent only $13US. Telstra and Optus need to come to Kenya and learn!

Because of the rolling hills of Kenya, mobile technology has transformed the interconnectivity of the people. One simple tower on the occasional hill and the mobile technology reaches even the most remote spot. Here we are, 2 hours from the nearest paved road and I’m posting pictures, videos and blog posts with four bars of 3G internet. Joseph says, “Yes, we are not remote Maasai, we are modern Maasai!”

As we passed through towns, in the final leg of our journey, we made some speed hump stops to purchase local produce - a bag of tomatoes $200, a bag of peas $150, spring onions $100, potatoes $350. And nothing seems to make them happier than selling to a Muzungu. They laugh at every word from my mouth and expression from my face. They pretend to not understand “no” and it makes for great opportunities to over dramatise the word NO! I was having fun, but I think they were having more fun than me as they pushed their hands into the window filled with vegetables and said, “You take! You like!”

Travelling down a straight stretch of paved road, Leon said, “Here it comes. The worst road in Kenya. It’s the only way into Kapune. He turned right off the paved road and followed a rough stony road that had smooth spots on one shoulder or the other worn down by foot traffic and motorcycles. Each time we would encounter someone on that smooth path the Prado would shimmy and shake as we drove both wheels out onto the stone strewn road.

After sometime on this road, it got worse. Huge ruts needed to be navigated. Large boulders blocked parts of the road and shoulders. Then, reaching yet another small village along the road, Leon turned sharply up a hill between two buildings. It was hard to call it a road at all.

What had been the worst road in Kenya now transformed into the best 4WD track in Kenya. It was steep, sideways, sharp corners, buildings and people to avoid.

Finally we came to a closed fence. Children materialised from the bushes all around. One boy opened the gate and Leon said, “Here’s the school we are building.” Just foundation and the first few layers of concrete blocks, the plan for the school is very easy to see. Two classrooms, back to back. Doors at each end, Chalkboards in the middle.

To finish our journey, Leon drove us the rest of the way - another 10 minutes - to the village where Joseph lives alongside his wife Mercy, their five children and the 15 sponsor children they have rescued from abuse, death and worse.