Last Thursday night my wife and I didn’t sleep. Cyrus, our 9 year old, was in an induced coma after fitting sporadically for over an hour. Jenny had watched him fitting but I had only seen him afterward—he looked asleep. 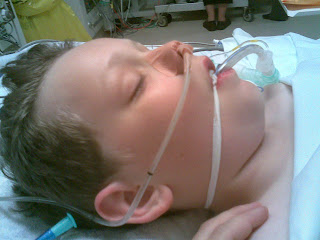 Cyrus had a breathing tube in his mouth that went into his lungs, breathing for him. The nurse said, “When he wakes up, he is going to want that tube out. We’ll have to hold him down so he doesn’t remove it.” She was right. As he woke he fought. His fighting caused him to start breathing for himself. He fell back asleep and the nurse said, “He’s breathing by himself, we’ll ask the doctor if we can take the tube out before he wakes completely.” The doctor said yes and the big tube came out.

There was another tube—a smaller one—that went in his nose and down into his stomach. “He’s not going to like that tube either,” the nurse said. “But, we can’t let him take it out.” She taped the hose to his little nose to make sure it stayed in place.

In the next hour, Cyrus woke bit by bit. He tried, many times, to open his eyes and make sense of his surroundings. We talked to him; told him where he was, told him we were with him, told him we loved him.

The whole ordeal was more stressful than I can ever explain. The thoughts in my head were at war. I wondered if he would wake at all, if he would fit again, if he would be paralysed or brain damaged. The other side of my brain yelled, “Hey! Stop those horrible thoughts! He’s just asleep. He’s gonna wake up and be just fine.” I sat, watching, waiting and hoping.

Slowly he started to cry. “My nose hurts,” he said in a slow drugged voice. My heart did a backflip for joy! He’s talking! He’s not fitting. He’s whinging! Cyrus is back!

When I told him later how happy I was to hear him complain, he looked at me like I was very strange. 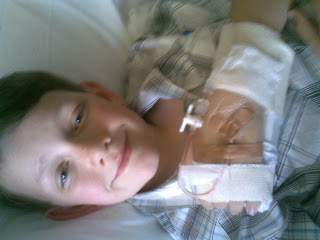 “Just to hear your voice,” I said, “to know you were alive and well. Those three little words told me so much!”

I wonder if that’s how God feels about our prayers. He knows we are hurting. He knows what we are going through. But just to hear our voice . . . it must mean the world to Him.

It has been said that a picture is worth a thousands words. There is a collection of pictures on your computer that represents your programs. They are tiny pictures, so maybe they are only worth a hundred words but they certainly save a lot of time! Those pictures are called icons. Each icon is a visual representation of a program with a hidden link that will open the program if you double click on it.
A blue W leads you to Microsoft Word. A blue “e” with a lopsided and fallen halo (that should tell you something about the product!) leads you to Internet Explorer. Or, for a more net-savvy and friendly experience, a blue planet embraced by an orange fox leads you to Firefox. Icons are our friends! Without them we would struggle with the vast collection of material on our computer.
Imagine that you were designing an icon to represent yourself—so that other people would be able to contact you with the press of a button—what would your icon look like? Mine would be one of those cartoon speech bubbles that show the words of the character. And inside the bubble would be the words, “blah, blah blah” to show that I am a communicator and will talk about nearly anything—just get me started! What would your icon look like?
Now imagine you are an icon. When you get double clicked, what do you open up? The word icon (or Eikon in its original Greek) has been around for thousands of years. It means “image.” Just like on your computer an icon is an image that represents something else.
Jesus was once asked by his followers, “Show us the Father” (John 14:8). Jesus was taken back—they could only ask such a question if they didn’t realise who He really was. “Have I been with you all this time,” Jesus replied, “and yet you still don’t know who I am? Anyone who has seen me has seen the Father!” (John 14:9). Paul explained the nature of Jesus by saying, “Christ is the visible image [eikon] of the invisible God” (Colossians 1:15). Paul was saying, if you double click on Jesus He will open up the Father—every time!

I’m comfortable with that idea
Jesus being just like God the Father sits well with me—it makes sense. But Paul takes the whole icon (living in the image) idea a bit beyond my comfort zone when he says that Jesus “makes us more and more like him as we are changed into his glorious image.” (2 Corinthians 3:18). It was Paul’s belief and teaching that the more time we spend looking at Jesus, the more we become like Him.
In another place Paul writes, “Put on your new nature, and be renewed as you learn to know your Creator and become like him” (Colossians 3:10). Paul wants everyone to realise that when people are looking for Jesus, they should need to look no further than His followers. When people double click on a Christian they should have Jesus open up before them!

now I’m uncomfortable
Paul, always one to push things to the edge, put it boldly when he stated, “You should imitate me, just as I imitate Christ” (1 Corinthians 11:1). I would be very hesitant to say that as boldly as Paul did. Even though I have been a follower of Jesus Christ for more than 25 years I shutter at the thought of other people following me because they are “sure” I am following Jesus. It sounds like arrogance, until you realise that Christians aren’t trying to be like Jesus—Jesus is making them more like Him.
It’s a world of difference, and Paul understood it. Followers of Jesus are more like Him with each passing moment as they keep their eyes fixed on Jesus. So, it’s not the Christian saying, “Hey follow me, I’m like Jesus.” It’s actually Jesus saying, “If your faith is struggling to see the invisible God, double click on one of my icons!” Every person on Earth is an icon which, when double clicked, leads to their passion and pursuit. True Christians are icons of Jesus. Double click on one, and they will lead you to Jesus—every time.

double click a Jesus follower
The Jesus that one of His true followers will lead you to, will not be a judgemental Jesus or a condescending Jesus—because that’s not who Jesus really is. People who have been looking at Jesus’ pure and lovely nature will lead people to freedom from such self-righteous attitudes. “Whoever is a believer in Christ is a new creation. The old way of living has disappeared. A new way of living has come into existence. God has done all this. He has restored our relationship with him through Christ, and has given us this ministry of restoring relationships. In other words, God was using Christ to restore his relationship with humanity. He didn’t hold people’s faults against them, and he has given us this message of restored relationships to tell others” (2 Corinthians 5: 17-21).
What an amazing promise! Jesus is calling all people to Himself so they can be made new, not so He can tell them a list of bad things about themselves. Jesus isn’t in the business of fault finding. He’s in the business of restoring relationships. And, the primary relationship He wants you to have in full strength is one with His father—God. “For God loved the world so much that he gave his one and only Son, so that everyone who believes in him will not perish but have eternal life. God sent his Son into the world not to judge the world, but to save the world through him” (John 3:16,17).
When Jesus came as the visible image of the Father, He presented a picture very different than what people expected in the Messiah. He said, “God is Love” (1 John 4:8). And He modelled that love with his actions, stories, life and death. The Icon didn’t look much like God—at least not what people had been told God was like. But Jesus was who he said He was and the Image He revealed of the Father stands today. God is a loving, forgiving, accepting and inclusive God that wants all people to know their Creator cherishes them.

just like Jesus
It is the role of Christians to reveal this picture of God. Right after Jesus rose from the dead, one of His followers was adamant he would not believe Jesus was alive until he had seen and touched the scars caused by the crucifixion. As he was in the midst of his impassioned tirade, Jesus walked up behind him.
You can imagine the moment of absolute terror on this disciple's face. What would Jesus do with him and his faithless words? Jesus’ response was both unexpected and far-reaching. Jesus showed the scars of the cross to the doubting disciple. And then Jesus said something amazing—he said something about you. Jesus said to Thomas, “Because you have seen me, you have believed; blessed are those who have not seen and yet have believed” (John 20:29). That’s us! We have not seen the scars on Jesus’ hands and feet. Jesus wants you to know that if you find Him and believe in Him without seeing the scars, you are blessed!
That’s the kind of person Jesus is—one who blesses those who struggle to see Him. That’s the kind of God Jesus is—one that shows, through his nail-scarred hands, what God’s love really looks like. And that’s the kind of followers Jesus draws—ones who doubt, ones who ask questions, ones who seek Him with all of their heart. All who come to the Father, come by seeing the Son. All must come to Jesus. Some come to Jesus by seeing the scars. But most come to Him by seeing a living breathing icon of Jesus—a Christian, passionate to restore relationships.
at February 21, 2008 No comments: