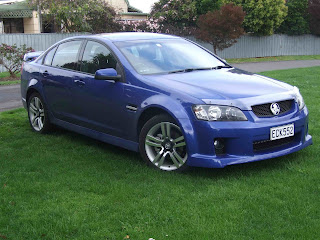 I'm on a work trip in NZ for 11 days. I hired a midsized car on the internet, but when I arrived I was offered an $5 dollar a day upgrade - because I was keeping the car for so long. Well, Check out the upgrade!

It's a brand new Commodore SV6. It only had 1500km's on it when I got it, which I will have nearly doubled when I return it.

There's no better place on earth to test drive such a great handling car than the curvy, well maintained mountainous roads of New Zealand. I have driven the car from Aukland to Napier - and will be headed back tomorrow. 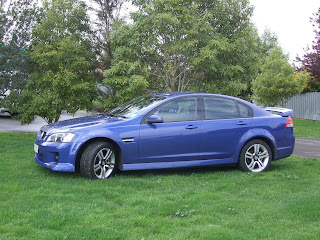 All I can say is, "What a ride!" It corners beautifully and can overtake like a rocket. I was behind a car, going up a very steep grade and anxious for a passing lane. Soon one came - on the steepest part of the hill. I switched lanes and dropped the pedal. I went from 100km's and hour to about 140 in only a second. It was stunning! 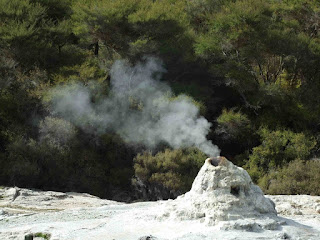 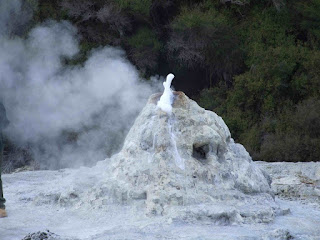 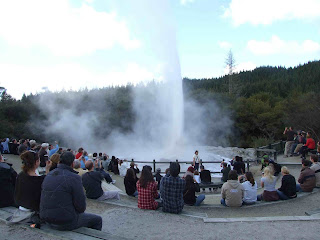 They decided to cap the inferno to cause a geyser, they piled stones around the edge and concreted it over. So, now there’s a geyser that shoots over 20 feet into the air once in every 36 to 48 hours. So, to make it more scheduled for tourists, they add soap every morning at 10:15am. And… Kaboom!
at September 15, 2007 No comments: 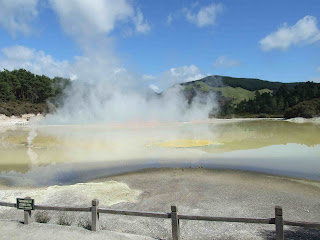 Then I went for a 3km walk around the thermal area. It was amazing. At the heart of the park is The Champagne Pool. The spring is 65 metres in diameter and 62 metres deep! 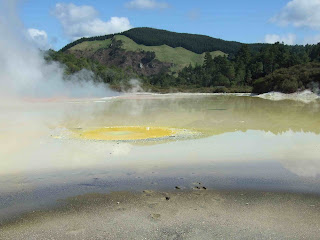 Its surface temperature is 74 degrees Celsius and had random bubbles caused by carbon dioxide. The pool is only 700 years old and was cuased by a hydrothermal eruption. 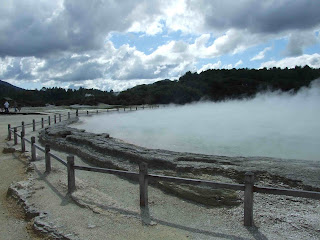 There are lots of different minerals in the pool including gold, silver, mercury, sulphur, arsenic, thallium, antimony and more. The various edges of the pool are caused by the settling minerals and the tilting of the pool caused by earthquake activity.
at September 15, 2007 No comments: 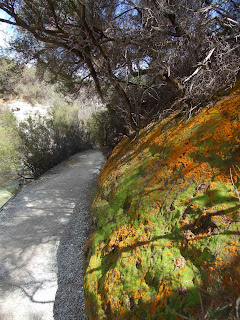 The mineral activity doesn’t only effect the water pools. It also colours the landscape. Here you can see Green—caused by sulphur and ferrous salts, and orange caused by antimony. 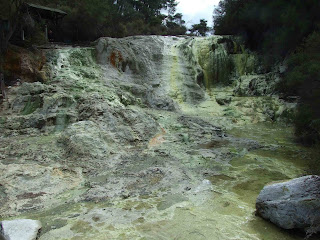 This amazingly coloured waterfall, called Bridal Veil Fall, has the same colours as above as well as red—caused by Iron oxide, and yellow—caused by sulphur. 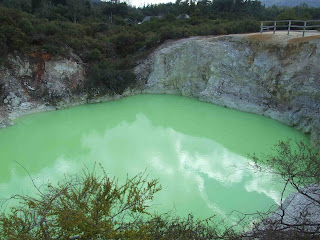 The last thing you see on the Thermal Wonderland walk is The Devil's Bath. I was walking around the loop with a couple backpackers and one of them, Wayne, said it looks more like Shrek pee. I think he's right!
at September 15, 2007 No comments: