Yesterday we had a very full and fulfilling day. We stayed Friday night in a motel in Hamilton where I was to preach on Sabbath morning. After attending Sabbath School with the little flock in Hamilton and preaching we headed out to the southern Grampians for a hike.
Jenny has always loved the Grampians and wanted to climb a mountain. So we did!
As we were nearing the town of Dunkeld Jenny kept saying we need to stop somewhere to get some boiled water (most petrol stations have coffee machines with free hot water!) so that she could cook up our instant soup to give us some energy for the trip up the mountain. Finally when we got to Dunkeld she asked again and I said, “’I have food you know nothing about’—to quote a friend of mine.” She looked at me with a incredulous expression. When we stopped at a picnic area I produced an entire picnic hamper and she couldn’t fathom where it had come from! What a great surprise! ☺
I had asked the head elder of Hamilton to arrange a picnic lunch and gave him a budget. I reimbursed him and collected the lunch from his wife when Jenny wasn’t looking. And what a great lunch it was! Delicious.

After our lunch we climbed

Mount Sturgeon—a 7km round trip hike that ascends 343 meters from the carpark to an amazing abutment of rocks that overlooks the valley in a panoramic 360 degree vista. It was truly amazing. 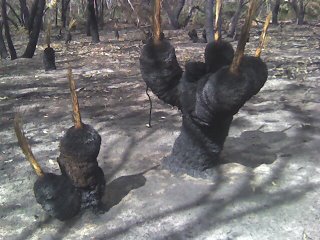 The first 1.5km was relatively flat and wandered through a surreal plain that had recently been burnt. 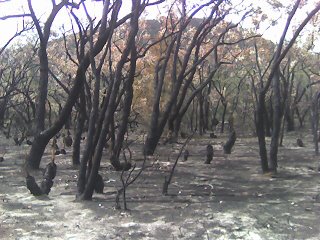 It felt like we were on a different planet walking through blackened terrain. 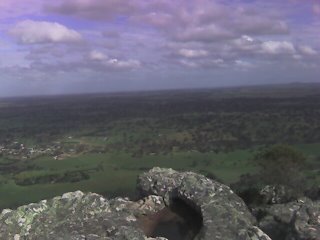 The sun came out from behind the clouds for the full time we were at the top and we enjoyed it’s warmth while resting on the cliff top! 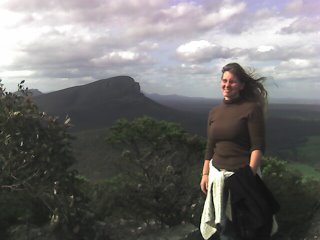 We managed to accomplish the entire climb, with a 10 minute pause at the top, in just over two hours.

After returning to the carpark we drove to Warnambool, then down the Great Ocean Road. The sun had been hiding for most of the day, only peeking out when it was absolutely needed. It emerged about 30 minutes before sunset and we were able to watch it descend over the Bay of Islands and finally watch it set from the Loch Ard Gorge.
We finished our drive to Apolo bay and arrived at Whitecrest at about 9pm. A day well spent! 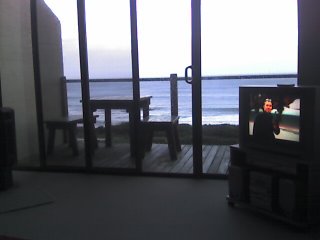 Jenny and I have been planning a romantic getaway for a few months. We finally made it! 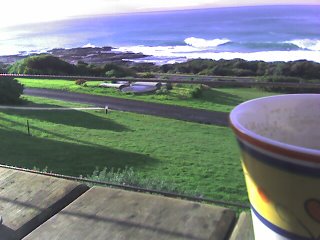 This photo is taken from the deck of our unit at Whitecrest Lodge in Apolo Bay. Looking across the Great Ocean Road and out over the great ocean! 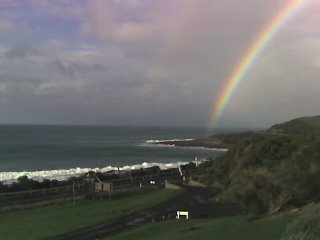 Due to the fine mist that was falling, an amazing rainbow formed over one of the bends in the road. For a moment there was a very faint double rainbow. Can you see it?
at September 24, 2006 No comments:

One of the activities that Nathan (the editor) had us do during his segment at the writers seminar was to write a short reflection on something memorable that happened to you at church. Here is what I wrote. Had to chuckle at these memories...

I have had a number of memorable experiences at church, usually with friends. I remember one friend who was prone to doing the unusual as a usual habit. He once swapped his Bible with that of a friend (they were identical bar the gold lettering on the cover) and waited for her to ask why she had his Bible. She never did. A year later he re-enacted the event and swapped the Bibles back. She was never the wiser to it!

I once sat in College church at Pacific Union College with the same group of friends and had a pressing, quite painful, bubble of gas welling up inside of me. I considered going outside to release the pressure, but was in the middle of the row. So, I opted for the silent option. I rolled onto one leg and gently released my clenched stomach. The resulting vibration and volume caused ridiculous giggling from my friends that was matched (and exceeded) only by the redness in my face.
at September 17, 2006 No comments:

This weekend we ran a writers seminar at the Signs. It will be run again, in various formats, in two other locations in the next couple weeks. Firstly at Avondale. Then at Brisbane big camp.

I ran a workshop on creativity yesterday afternoon and had a lot of fun doing it!

Below you will see some of the information that I shared.
at September 17, 2006 No comments:

Finding creativity in others

Building them up:
Get to know them
Find their passion
Get involved in their passion
Give them training
Create a safe place for them to thrive
Build them into teams
at September 16, 2006 No comments:

Finding creativity in yourself

Become an idea farm
Prepare soil: Read widely, study people, talk to strangers, get lost, consume media, daydream
Get seed: Buy it (proven ideas), borrow it (other people’s ideas) , let it blow in, use last years (your old ideas revisited and revitalised)
Plant seed: Write down every idea (jotter pad, blog, notebook), float half formed ideas to people (friends, family, experts and target audience)
Just add water: Plan it out, write it out, sell it or start it, build a team, write an article/sermon, form it
Harvest: Submit the article, preach the sermon, fly the kyte, run the event. do it
Enjoy/share: You have earned it, enjoy the bounty, share and teach your successes and failures
Lay fallow: Rest (it’s the way God made us!)
at September 16, 2006 No comments:

The kids and I sat on the couch this morning and designed a comic of some old photos with Daddy's new MacBook and a great little program called Comic Life that came free with the Mac. 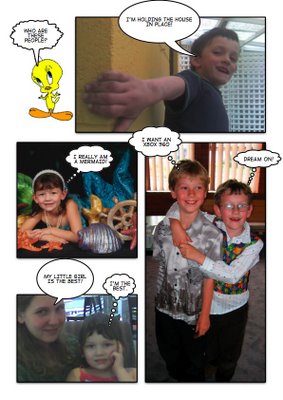 Last Friday was a very interesting one indeed. I put the Rav4 in for service and so Rachael and I decided to take the train into Ringwood to go to Eastlands shopping centre. We got our tickets and boarded the train in Lilydale.
After shopping at Eastlands for a few hours we decided to take the bus home (it's all on the same $2.30 all day ticket!) and so we sat at the bus stop and waited. The bus came. We got on. And two minutes later I realised that I didn't have my bag - it has my IPOD and PSP in it, plus other bits and pieces. The bus driver kindly lets us off and we ran back. (Rachael is a fast little runner!)
When we got to the bus stop the bag was... gone. I stood there stunned and winded. I looked left, right, up the street, down the street. No one. It was gone. People walked by. Cars drove past. A lady in a wheelchair pulled up to the bus stop, "Are you looking for a bag?" she said.
Stunned, I looked down and said, "Yes!"
She said, "I just took it to Centre Management. Just go in the door and turn right."
I was amazed. I thanked her, "You are a very honest person!"
She smiled and Rachael and I quickly made our way to the bag.
Unfortunately, it was getting close to the time that we needed to pick the boys up from school, so we didn't have time to wait for the next hourly bus. We hurried over to the train station. As we approached the train was just pulling into the station. They don't wait for long so we ran again. We found a seat and fell into it exhausted. 15 minutes later we pulled into the third stop and the signs said "Boronia."
The train line splits at Ringwood—one to Lilydale and one to Boronia and beyond... So, we got off the train, waited patiently for 20 minutes, and got on one headed back to Ringwood. While we waited I met a young lady who was searching for work. We talked the minutes away and had a lot in common. She's a professional soprano! (just like me) :)
On our way back to the Ringwood station I was sitting next to one of the many windows on the train and a large rock hit the window with enough force to create a spider web of shattered glass the size of a serving tray. It was a loud noise. And, since it was right next to my head, it was quite startling. Being of sound mind, I didn't jump. I just looked at the cracked window, turned to the guy across from me, and said, "Looks like Superman was flying a bit low." My seatmate, not being of sound mind, was not amused. Another rock had also struck a window further forward in the car. Evidently some kids decided to throw rocks at the same time. Interestingly, even though the glass was shattered, I couldn't feel the cracks—must have been two panes of glass, both very thick.
When we got back to Ringwood, we only had to wait for a minute or two for the right train and we arrived in Lilydale 10 minutes before the boys got out of school. We caught a taxi to the service station and paid for the car service and quickly drove to the school. On the way, the phone rang. It was the service centre calling to tell me that I had left my credit card with them. We picked up the boys and went back to get the card. Having more time, I gave them a few copies of the latest Signs. (As I do) :)
Then we went to Chrinside Park shopping centre and bought a few things for the weekend and headed home. On the way home I decided to stop at Goodyear Tyres as the service centre had said that the tyres were needing replacement. I thought I would book an appointment for some new wider wheels and road tyres (rather than the skinny 4wd wanabe's that were balding). The guy was really nice, made some suggestions and then said, "Why don't we slap one of these on the Rav and see what you think? Do you have 10 minutes." I did. And so they did. And it looked great. I asked when we could book it in to get it done and he said, "We can do it now, if you'd like." I was amazed. Where do you get service like that? So, I had new tyres on my Rav for my trip to preach in Sale the next day (about 500km round trip) and they are excellent tyres! Quiet and hold the road beautifully!
So that was last Friday. My day off.
A successful day.
And interesting to boot!
at September 12, 2006 No comments: