There is no greater time than now, amid the chaos of COVID, to carry the Gospel to the world. We, the church, are the appointed agency for the salvation of all. We do this carrying – this lifting and laying on – of the Kingdom of God through our word and action. As we do, our embodied hope stands boldly juxtaposed against the words and actions of the broken fallen saddened angry world. Our own ancient story speaks to us through godly men who lived in evil empires of the past. 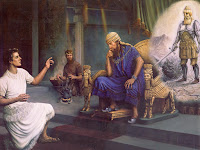 Babylon, used in Revelation as a synonym for the end-time empire that will reign over the fall of mankind into debauchery, was blessed to have decades of Divine guidance. A believer in the one true God named Daniel stood for what was right against all odds. A boy when Jerusalem fell, he came to Babylon as a captive. When Babylon fell some 70 years later, Daniel chose to stay when he could have gone home. He stayed to make Babylon a better place – bringing God’s light and love into darkened self-centred chaos.

Years before, Egypt was also blessed to have the leadership of a believer in the one true God. Joseph could interpret dreams. And through the power of God, he did so to save the kingdom of Egypt from famine. Like Daniel, Joseph stayed until his dying day. He also could have returned home. Instead, he invited his family to join him in the life he had built in Egypt. A life where he used Godly insight to bless an unbelieving kingdom.

We too live in trying times with death and chaos on every side. As the church, Christ’s body in the world, we have one job. We cannot choose to join the throng of unremarkable men moaning of the dust and doom. Our job is to glorify God’s name by using our spiritual connection with God on behalf of the dying world. Shine where we stand. Burn in the darkness and darkness cannot remain.

Dare to be a Daniel. Risking his own life, he stopped the deaths of Babylon’s unbelieving ‘wisemen’ by using his Godly giftedness. He asked and God answered – giving him the king’s dream and interpretation - and all were saved.

Journey like Joseph. His putting others first, repeatedly, led to God saving millions of lives – believers and unbelievers alike. To the ancient Egyptian nation God made Joseph a fountain of life. The nation of Egypt was preserved because of this one Godly man choosing to use his gifts for God’s glory in the court of Pharaoh rather than hide under a bushel and bemoan his lot in life as a slave.

Use your energy to reach out to those suffering around you. Find your happiness through helping and blessing others.

Use your words to create a refuge in this reign of chaos. Build the fortress that is God’s church which holds fast even in this old bitter revolted world.

Over millennia God has shaped His church for service. Shaped for such a time as this. You’ve been called out of darkness.

Church, you have been set alight with the marvellous light of God’s glory. Now shine!