I can’t say I wasn’t warned about Dubai.

My mother in law likes to tell the story from my wife’s childhood of the time they stopped on route to Germany in Dubai. It was a hot day and in dire need for water they made their way to a cafe and ordered a bottle of water. The host turned, filled an empty bottle with water, put a lid on it and delivered it with the simple request, “Five dollars please.”

I was struck by the distinct difference Dubai offers today when, in the men’s restroom, my every move - nearly - was assisted by a helpful attendant. As I headed toward a stall, I was compelled to wait - and watch - as the floor was quickly mopped and toilet seat wiped with copious amounts of toilet paper furiously and dramatically drawn from the wall dispenser before my very eyes. Then I was invited in with a generous wave - as if a king were being anounced as he approached his throne. Upon nearing the washbasin, my trusty assistant again appeared - this time to dutifully depress the soap dispenser so that I need not touch it as I washed my hands in the automatic luke warm tap water. Having a personal assistant in the restroom was an experience unexpected but not completely unappreciated.

While the Dubai airport has lifeted it’s game remarkably and is not the kind of place today that would sell you rebottled water, its prices have followed its service - into the stratosphere. Approaching a cafe counter and ordering a latte, I was told to sit - “We serve you!” The man said, “Then you pay, when you finish.” That should have been the first sign of the price to come. 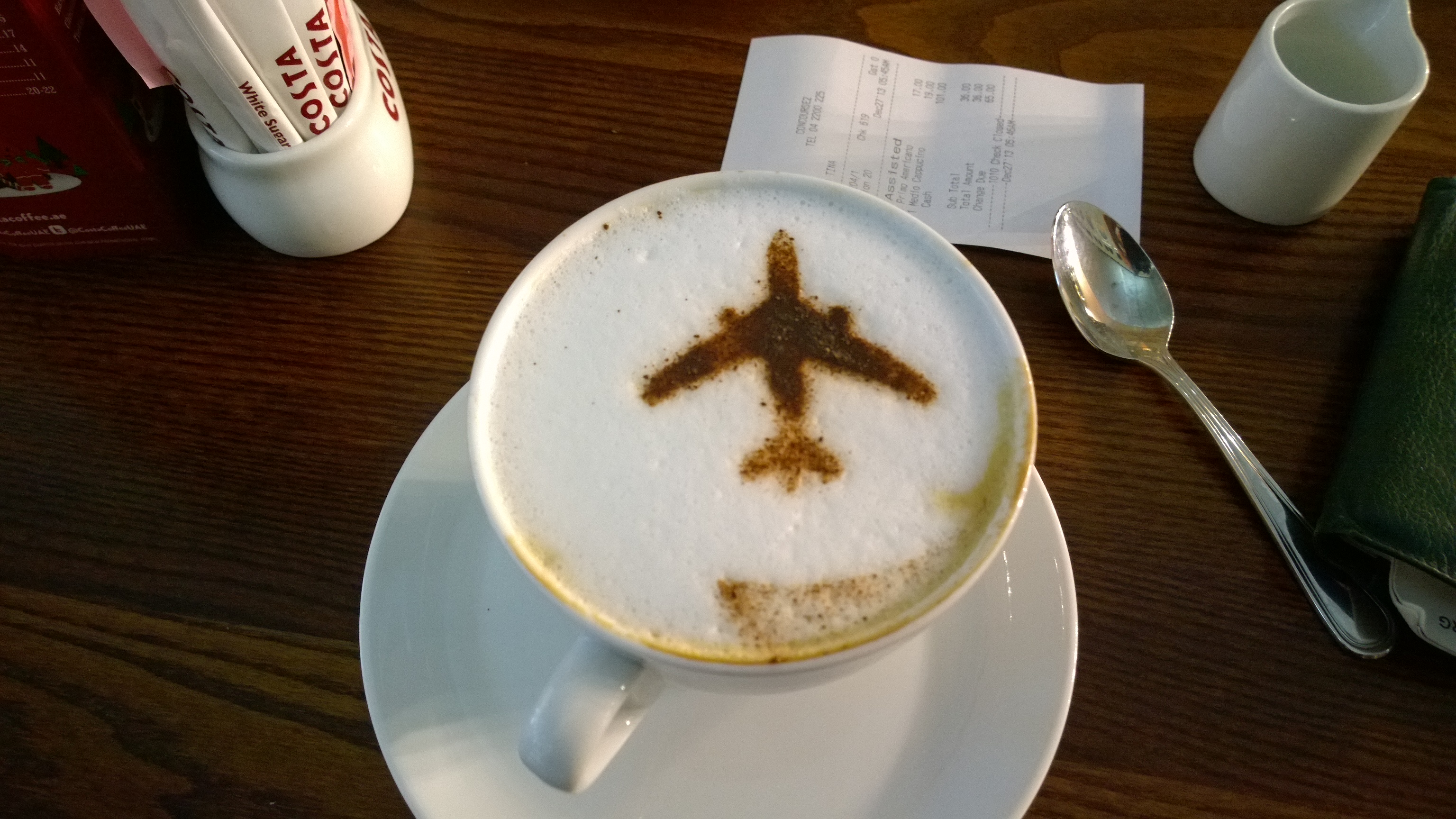 Having just finished a 14 hour flight from Melbourne, I was looking forward to a large coffee rather than the small on-flight after dinner cup I had received some hours earlier.

a few minutes after sitting, a waiter came to our table and I ordered the latte again. It was scribbled down on a notpad, as was Courtney’s hot chocolate. Courtney had just completed the Brisbane - Dubai flight. We are both heading to visit and help Education Care Projects Kenya for the next three weeks.

Having four hours to kill, we leisurely drank our drinks and chatted about our lives. Having never met before, we had plenty of material with which to fill the time. When we finished, we approached the cashier and asked him to split the bill. I paid for my drink on my bank card and headed outside the crowded cafe to wait for Courtney. After some time, concerned, I returned to the cashier. Courtney’s card wasn’t playing nice with their machine and she had pulled out some American cash.

“We can only give you local currency as change,” the man said. Courtney was not impressed as we were soon to leave Dubai and she had no need for local currency.

I handed the cashier my card again and the ordeal was over. As we got outside the cafe, Courtney said, “He was going to charge me $7.30 American for that hot chocolate!”

I smiled and told Courtney the story of the $5 bottle of water from yesteryear. “Let’s have a look at my account and see what it actually cost,” I laughed.

Sitting at our gate I loaded my Bendigo Bank app and looked at the two drinks - now itemised due to the seperate transactions. Courtney’s cup of hot chocolate was a miserly $9.40 AUD… And my large latte - a cool $11.38 AUD …

“That’s one thing I love about travel!” I said to Courney, “there’s an adventure around every corner!”

“From now on,” I said, “I shall call Dubai the land of the eleven dollar latte.”

Now, I sit cramped in the last row of the plane, less than an hour from Nairobi. In the way of all good adventures, the memories of mop man and the 11 dollar latte have begin their journey into story.

My mind, already losing focus on the past 24 hours of travel, anticipates the adventures looming on the horizon with Education Care  Projects Kenya.