Anything can Happen in Kenya

As we were driving to Kapune, Carole said, “There is a clear plan laid out for the next three weeks but anything can happen in Kenya. So, expect anything!”

Yesterday, at then end of the morning meeting, wailing could be heard down the valley. A number of the Maasai young men took off running to see what it was.

I walked up alongside Joseph and said, “What’s happened?”

“Something bad,” he said. “The wailing means something has happened.”

“Someone is very injured,” he said, “or very sick. Maybe worse.”

There are three kinds of Maasai wailing. Each is intended to convey a different story to neighbours. There is a wail for injury, a wail for death and a wail for stolen cows.

Joseph pulled out his mobile phone and called a number. He talked in Maasai for less than a minute and then hung up.

“A four year old girl has just died.” he said, “In a house down there. We knew she was not well yesterday. But it was worse than that.”

“What happens now?” I asked.

“There will be a funeral.” Joseph said, “but not a big one or a long one because it is a small child. It will go for one or maybe two hours.”

“Why is it less than other funerals?” I asked.

“A funeral is when people come to show respect and tell stories of the person who died.” Joseph said, “A small child has few stories and has received no respect yet. People will come to give respect to her parents and family but there will be few stories for a life so short.”

Last night, the message came through the Maasai grapevine that the funeral would be today. “Very quick,” Joseph said, “because it is not needed to give time for people to come. To show our respect, we will not have a meeting while the funeral is happening.”

This morning, Joseph came to our house and said it was up to us if we wanted to go to the funeral. He gave reasons both for going and against going. “You will show respect by showing up but you will also present them with a dillema of what to do with you. We give much respect to Muzungus. They may not want to weep in front of you. There will be much need to weep for a little child dying.”

After deciding that we would stay here and work on various projects, Joseph said, “Also, could you all come have a look at Vivian, her angle is not better today.” We had been told the night before that a child had pulled a muscle.

“Can she stand on it?” Courtney asked.

“It could be broken, Joseph,” Carole said. “We might need to take her to hospital. We will come look now.”

We walked down to Joseph’s house. He picked up seven year old Vivian and brought her out into the sunlight. There was not a tear in her eyes and she didn’t make a noise. Her ankle was swollen but not as much as a sprain should be.

I reached down to the good foot and said, “Can you wiggle these toes, like this?” Joseph translated. I closed and opened my hand. She wiggled her toes on the good foot.

“Now this foot,” I said, opening and closing my fingers near the other foot. "Can you wiggle these.” She tried and grimaced in pain. One toe moved slightly.

“We need to get her to hospital,” Carole said. “We will go get the Prado.” 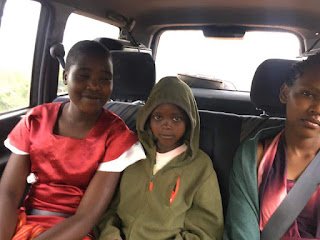 Normally, a motorcycle taxi would be called and injured people ride on the back to the hospital. It is a blessing that Leon and Carole were are with a vehicle. Just a few weeks ago, a pregnant neighbour woman had been in labour for four days in her house before her husband called Joseph for help. She was taken to hospital on the back of a motorcycle taxi! Unfortunately both she and the child died in hospital.

“This is why I have enrolled to learn to drive,” Joseph told Courtney today. “We must have a vehicle for these children, for emergencies. And I must learn to drive!”

The trip to the hospital is a long bumpy journey back down the worst road in Kenya. Courtney offered to drive. Two other Maasai girls went in the back with Vivian.

As she walked out the door of our Masai mud house, Courtney said, “You’ll definitely be writing the story of this day!”

“I’ve already started,” I said, looking up from my writing table.

“The end of the story is yet to happen,” Carole said as she followed Courtney.

“I’m sure your day will be filled with adventure!” I said, “It will be a chapter all it’s own, no doubt.” 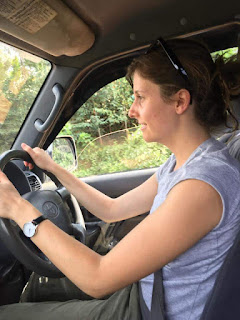 Once they were off on their journey, Joseph and I sat down for a marathon storytelling and writing session.

“You know,” I said to Joseph, “Carole told us anything can happen in Kenya.”