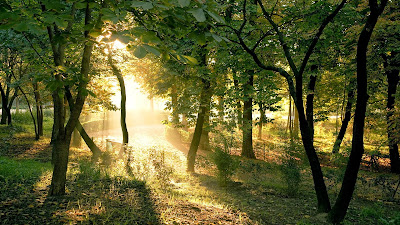 Let’s think about it in detail. Review Sunday’s lesson — what is your favourite parallel between Eden and the Temple? Why?

Can you think of any other parallels that aren’t mentioned in Sunday’s lesson?

Before sin, God planned Eden to be His Temple — His place of interaction with humankind. The Sanctuary in Heaven will exist for eternity, long after sin is wiped out. Without Sin, what is the purpose of the Sanctuary or Temple?

To ancient ears listening to the people of God telling the Creation story to the nations around them, the “building of a temple” motif in Genesis’ Creation story would have been obvious. There was a multiplicity of god’s in the faiths around Israel. Every god had their unique temple and story — and those stories followed a pattern.
The temple of each god told the story of that god. By going to the temple of their god (or, for those who lived a long ways away, even telling the story of that temple) people were able to remember their gods and worship them because each temple was filled with reminders of the god’s story.
At the heart of each ancient temple (and thus the heart of each god’s story) was the image of that god — an idol. The worshippers knew the image was not the god but a reminder of the god. The idol was enshrined in the midst of their temple to provide an ultimate representation of their god.
The Creation story in Genesis is a work of evangelistic genius, telling the people of antiquity not only that this was the One true God — the Creator of all that is living — but that humanity, created as the crowning act and placed in the heart of the Garden Temple was created in the image of God. Therefore humans cannot worship any other image because they are, in effect, at the heart of a temple to God and in seeing themselves they are witnessing the Creative power and presence of the One true God.
How does this idea sit with you? Pull it apart, explore it.

To the ancient hearer, how would a living Garden Temple stand out from other temples they had heard about or experienced?
In the Genesis account, to what lengths did God go to insure the creation of “His image” stood out as a unique creation event?
To the ancient hearer, how would a living image stand out from the other images they had heard about or seen? What would it mean to them to recognise, that to this One true God, they, male and female, were created as His image?
When the Garden Temple was finished, how did God celebrate?
To the ancient hearer, what impact would the idea of a living temple housing a living image of the Living God have on their opinion of other gods?
How does the idea of the Garden Temple and all that it signifies, bring new purpose to your weekly Sabbath observance?
How can we use the great evangelistic message of Creation week to draw people to the God of the Garden?

Monday’s Lesson makes a mistake that is often made. Type and antitype are confused (in the printed edition, corrected online). Type is always the copy because it is “a type” of the real thing. Antitype means “not a type” but the original. How often we as followers of Christ make the same mistake in our lives, beliefs and relationships. Continuing the Garden Temple theme, how can we ensure that we do not selfishly confuse the type (The image) — ourselves — with our Creator God, thus giving ourselves the glory for our creativity and giftedness? What other types do we over-value to the point of worshiping the image rather that the Source?

When considering the Sanctuary pattern, how might the Garden of Eden’s sinless reflection of the Sanctuary be different than the Mosaic Temple? How does Sin change the purpose of the Temple? What might the Temple in Heaven look like?

When Jesus tabernacled among us, type (humanity) intertwined with antitype (God). The image and the Source merged providing a glorious revelation of the reality of God. With this in mind, what is revealed by the following:
That Jesus, God made flesh, was a human who had “no beauty or majesty to attract us to him, nothing in his appearance that we should desire him” (Isaiah 53:2). Why become an average human? Why not a beautiful, majestic, shining example of perfect humanity?
That Jesus, God made flesh, said He had come to “proclaim good news to the poor. ... to proclaim freedom for the prisoners and recovery of sight for the blind, to set the oppressed free, to proclaim the year of the Lord’s favour” (Luke 4:18-19. Isaiah 61:1-2). Why did Jesus choose this text to exemplify the purpose of type meeting antitype? How does focusing ministry on the “least of these” increase the beauty of God’s image in mankind?
That Jesus, God made flesh, provided himself as the ultimate example of successfully living “in the image of God” and explained his actions, “Now that I, your Lord and Teacher, have washed your feet, you also should wash one another’s feet. I have set you an example that you should do as I have done for you. Very truly I tell you, no servant [type] is greater than his master [antitype], nor is a messenger [image] greater than the one [God] who sent him” (John 13:14-16). Why should Jesus establish this act of humility be the highest declaration of image-bearing? Why not another, more glorious, act?

How can the church be more “image” bearing?
It is often said, “You may be the only Jesus some people ever see.” If this is true, then you haven’t finished the work given to you! We are the type, not the anti-type. How can we ensure that the church is “Heaven on Earth” while NOT letting it become the only Heaven people ever see?
How can we balance the mission of Jesus for the healing of the individual human with the mission of God for the healing of humanity?
at October 09, 2013