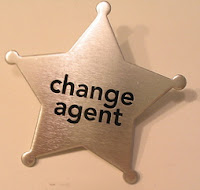 This year’s Junior/Teen Week of Prayer reading guide is set in an imaginary Junior/Teen group called “The Change Agents.” They are hoping to be Jesus’ agents for change in the world.

Drake - Drake is a PK (pastor’s kid) in the local Adventist church. He’s fourteen and feels he’s heard quite enough of the “God stuff.” He wants out but doesn’t want to cause trouble, so he makes fun of stuff rather than taking it seriously. Drake enjoys science and sports. Drake is a twin.

Liam - Liam is fifteen and the older brother of Nic and Chloe. Liam is a fairly serious kid and prefers quiet time alone to social time. When he is with people, Liam is a watcher and a planner. If you need to go somewhere, Liam will get you there.

Melissa - Melissa and Chloe have been best friends for as long as they can remember. They go to the same school, the same church, and like the same things. Melissa’s birthday is coming up and she can’t wait to be a teenager. She loves words and writes great poetry and stories.

Nicholas - Nic is very active and gets involved with anything happening near him. At thirteen years old, Nic enjoys playing computer games with his older brother and doing creative crafts with his younger sister. He loves playing sports and pulling practical jokes. Nic is full of creative ideas.

Shane - Shane is Drake’s “younger” brother—by seven minutes—but Drake never lets him forget it. Shane is a lot like his dad, the pastor. He loves finding new, interesting things in the Bible. He loves talking to people about his beliefs and his church. Shane is a twin.

Mr. Malku - Benjamin Malku is the adult looking after the Change Agents Group. He is “Dad” to Chloe, Nic, and Liam. Ben loves helping kids have fun while changing the world for Jesus Christ! The Change Agents Group runs in their home every Wednesday night while they have dinner together as a group.

Mrs. Malku - Grace Malku usually makes dinner for the group. She helps with the group projects as well. She is very creative and loves getting kids involved in making something new.

Want to read the rest of this series?
The rest can be found here.