Various answers came from around the lounge room.

“Does anyone have any acts of ‘outward focused’ worship they want to share?”

“I do,” Melissa said, holding out her plaster-covered arm.

“I heard about your fall,” Mr. Malku said. “How’s your arm healing?” 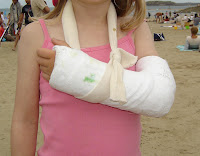 “It’s ok,” Melissa said, “but it’s not the broken arm I wanted to talk about. It’s the writing all over the plaster! So many people wrote such lovely things. I felt like God was smiling at me all week long!”

“Even when you hit the ground and snapped your arm?” Drake grunted.

“No,” Melissa said. “But these messages on my arm wouldn’t exist if I hadn’t fallen. So, God can make good out of anything!”

“So,” Mr. Malku said, “You felt the outward focus of other people as they cared for you?”

“Yep,” Melissa said. “I am planning on breaking the other arm next week!”

Everyone laughed. “That’s a great story,” Mr. Malku said. “Is there anyone else? Did anyone have an opportunity to focus outwardly in your acts of worship this week?”

“Yeah,” Nic said, “I got fouled real bad in basketball and it wasn’t fair. But then I remembered ‘love mercy’ even though I wanted to ‘do justice’ to the other guy.”

Another round of laugher swept the room. “So, yeah, I didn’t hurt him,” Nic said. “It was weird actually, the moment I thought ‘love mercy’ it was like a new attitude took over. The whole game was better!”

“That’s great, Nic,” Mr. Malku said. “And that is exactly what should happen. When we turn our worship outward, it changes everything—from sports at school, to conversations at the shops, to the way we treat everyone we meet.”

Mrs. Malku’s voice sang out from the kitchen, “Dinner is served!”

“And the Kingdom is growing!” the group chanted back as they left the lounge room behind.

“I will,” Melissa said. “Dear Jesus, thanks for this delicious food. And thanks for Mrs. Malku who cooked it for us. Please bless us all. Amen.”

“Tonight,” Mr. Malku said, “we are going to talk about loneliness. When have you felt the most alone?”

The table was silent for a few moments and then Chloe said, “When Melissa broke her arm it was scary. I was on the playground when she fell. I was with her first. Then everyone crowded around us. Then the nurse came. Then the ambulance came. Then they all left. I had to stay at school, even though Melissa is my best friend. And it was so lonely when they took her away. I just wanted to be with her.”

Melissa reached across her broken arm and took Chloe’s hand in her good hand. “Thanks, Chloe. You’re the best friend ever.”

“Anyone else?” Mr. Malku asked. “When have you been most lonely?”

“When my Mom left,” Stephen said.

There was a moment of awkward silence and then Shane said, “One time Drake left. He went away to science camp for a week. That was really lonely. We’re always together!”

Drake studied his brother’s face. A little smile played across Drake’s lips, “Well, other than those seven minutes of absolute peace, you’re right!”

A brief commotion of kicking erupted under the table and then the twins started laughing uncontrollably. Everyone joined in.

As the laughter died down, the group returned to their meals.

“What Bible stories can you think of,” Mr. Malku asked, “in which God shows up to help a suffering, sad, or lonely person?”

“When Jesus went to visit Mary and Martha after their brother died,” Chloe said.

“Good,” Mr. Malku said. “What about before Jesus came—in the Old Testament?”

“Jonah,” Nic said. “God showed up to chat with him about being selfish.”

“Samuel,” Liam said. “God showed up and spoke to him we he was only a boy.”

“I don’t think Noah was sad or lonely,” Drake said. “But his wife probably was after everyone started laughing at the boat and Noah was always busy building it!”

“Hmmm....” Shane said, “Ok, how about Moses? He was alone in the desert and God showed up to give him a new life!”

“What about Adam?” Stephen asked. “You know that first guy in the Bible we talked about a few weeks ago? He was lonely and God showed up, put him to sleep, and created a wife for him.”

“Good one!” Mr. Malku said. “Why do you think there are so many stories of people being alone, sad, or afraid and then God shows up?”

“Because He doesn’t want us to be lonely?” Melissa asked.

“Because He loves us,” Melissa answered.

Mr. Malku nodded and then said, “Tonight we are going to spend some time in small groups reading a different story in each group. Afterward we will come back and tell our story to the other groups. Let’s clear the table and then head back into the lounge room.”

God shows up in each of these stories.

In your study-group, discuss the story you have been assigned. What is surprising to you about this story? Why does God show up? What is God concerned about? What is the “teaching point” of the story for you?

Come back together as a big group and have each study-group retell the story they explored and what they discovered about the God who sees, hears, and feels.

These three stories are all from the life of one generation of one family. How does this make you feel about God’s interest and concern for each of us?

Mr. Malku smiled as he closed his Bible. “Well, those were fantastic retellings of three great stories about one great God!”

“What do you guys think?” Mr. Malku asked.

“He sure does,” Melissa said. “I felt His love so strongly through everyone who helped me with my arm and who wrote on my plaster-cast.”

Mr. Malku said, “Let’s take Stephen’s question from a different angle. What is the worst pain you have ever felt? For Melissa, it’s probably her arm. What about the rest of you?”

“When my hand got caught in the car door,” Drake said. “I was five, but I still remember it!”

“When I got paint in my eye,” Chloe said.

“Do you think God understands your pain?” Mr. Malku asked.

“Yes,” Shane said. “Because He went through the most painful death imaginable. And He did it by choice because He loves us!”

“So, you’re saying,” Stephen was thinking out-loud, “we can know God cares about us today, in our pain, because He has felt our earth-pain?”

Mr. Malku smiled. “I like that … ‘earth-pain’ ... there’s a lot in that. Yes, because of His love for us, Jesus died so we can live. He wants us around. And He keeps showing up to let us know that!”

“Over the next week,” Mr. Malku said, “I want each of you to look for times when God shows up—times when you recognize Him seeing, hearing, and feeling what you see, hear, and feel. OK?”

“And next week we will talk about the God who stoops.”

“Stoops?” Shane said. “Do you mean like stooping to go through a low doorway or something?”

“Which of our doorways is big enough for God to enter through?” Mr. Malku asked.

Everyone was quiet for a moment. “None of them,” Chloe whispered.

“So God has to stoop,” Shane pondered, “just to get into our lives?”

“And therefore we stoop,” Mr. Malku said, “because—”

“My dad is pretty wise. He studies a lot,” Stephen said. “He has four values for life. He calls them the ‘Four Pillars.’ He says they hold up the good life.”

“Do you think your dad would be willing to come talk to us next week?” Mr. Malku asked.

“Thanks,” Mr. Malku said. “I’ll give him a call over the weekend, after you’ve had a chance to talk to him. Alright, until next week, what are we?”

The group sat up, “We’re Change Agents!” they chanted.

“I’ll pray,” Melissa said. “Dear Jesus, help us make a change in our world this week. Help us remember we are never alone; you are always seeing, hearing, and caring for us. Amen.”