In life, there are occasional days that open up the world to you through the difficulties you surpass. Today was one of those days.

Leaving Joseph’s property, we drove to the school that Education Care Projects Kenya is building to provide safety and education to the children rescued in Maasai Land. We stopped and snapped a few photos of the school’s foundation and the beginning of the walls. Leon will be back in April to continue building. Any builders willing to assist, Leon would be very grateful! 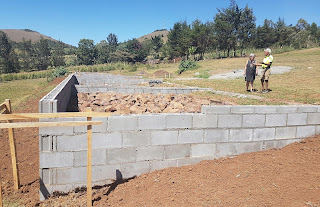 Once finished at the school, we headed back down the worst road in Kenya to get to the nearest village where we purchased lunch - chipates - a local flatbread served hot which is cross between a tortilla and a crepe. Very delicious and very hot!

We then headed back up the road toward Joseph’s but turned left before reaching it. We then weaved our way along the dirt track that took us through many small villages. Using google maps and Leon’s local knowledge we navigated our way to the Tarmac road more than 2 hours drive from the beginning of our day’s journey.

When we reached Kissi, the first large town, we stopped to have two punctured tyres repaired. This was an amazing opportunity to watch the Mzungu master of local bartering at work. Leon knew what to expect.

As we pulled into service station we stopped in the repairs area rather than at the petrol filling pumps. This gave the sharks their first scent of blood. A couple of repairmen walked leisurely toward the vehicle. When Leon, a Mzungu man, stepped out of the vehicle it was like throwing a bucket of blood in shark infested waters. They came from everywhere!

The repair work at petrol stations in Kenya - to say it in a nice way - seems to be a cooperative effort between the petrol station manager and numerous small business owners. They came from around the petrol station, down the road, across the road and in the middle of the road. “Leon loves this,” Carole said, her tongue planted firmly in her cheek.

Leon carefully selected one man and began dealing with him. Later, Leon explained, "They all want money. Every man who does anything will want to be paid substantially for his small part.”

Leon took a flat off the back of the vehicle and explained, to the man of his choice, "It has a hole in it. Soapy water and plugs are all you need to do. I will give you 150 for the job.” The man took the wheel, rolled it across the road to his puncture fixing stand, and began taking the tyre off the rim, “NO!” Leon said, “Just the holes!”

Back in the car, Carole said, “We should get some drinks. They might have something in the shop.” After a brief search, we found a refrigerator with some Fanta, Coke and fruit drink.

As I returned to the Prado with the bottles, I was accosted by a local superhero, “I am Puncture Man!” He pointed seriously at the rear tyre and said, “Flat tyre!” I agreed that the tyre was definitely low. “I fix now!”

“I am not Boss Man,” I said. Pointing across the road at Leon who was defending the abused tyre on the other side of the road, I said, “He is boss man. He decides.”

“You talk to him,” Puncture Man said, sweeping his cape aside and valiantly stopping traffic to lead me across the road by the arm. When I arrived at Leon’s side, I explained the other tyre to him. “Yes, it will be fixed next,” he said.

I said, “This is Puncture Man, he is here to rescue the other tyre from certain death and destruction.” (I may have said something less witty at the time, but stories get creative in the retelling!) Leon explained that he only hires one man at a petrol station to keep costs in control.

I explained this to Puncture Man and he was not happy. “It’s faster for two men with two tyres!” He said. I pointed sadly at Leon and said, “Boss Man.” Then I shrugged my shoulders and raised my palms in front of me.

“I’m sorry,” I said before I walked back across the busy Kisii road, alone and unprotected by any local super heroes.

When the two tyres were repaired the fun really began. They wanted 700 shillings for the 300 shilling job. Leon explained, before he began, that the job (which he has had done many times at many places in Kenya) is worth 150 a tyre.

Among the many comments that exceeded their language barrier were Leon saying, “I will not!” And “Come off the grass!”

“You will pay each man!”

The ladies in the back seat were giggling uncontrollably. Anyone who knows Leon, loves him for his gentle nature. But, as Leon says, “When it comes to God’s money, I will not waste it!”

To save money, Leon does most of the repair work on the Prado himself. He has two shock absorbers he will be installing before we head out of Eldoret on Wednesday for our next long drive. With all the skills to repair the vehicle himself, and the knowledge of local prices, highway robbery takes Leon’s righteous indignation to unknown heights!

After leaving Kisii we had driven an hour or so when the Coke and chipates combined in an explosive brew and caused my stomach to began behaving very disrespectfully. Every bounce and jostle sent gases wheezing through my internal pipes in all directions.

After an hour or two of shifting my position repeatedly in an attempt to ease the discomfort, I mentioned my agony to the other passengers. Graciously, no-one mentioned that they were already aware of my situation. “We will stop at the next service station.” Leon said, “They will have a bathroom.”

Some time later we came into a town and found a service station. We asked about a bathroom and they lead us through a warren of backstreet rooms behind the station and she said, “You want washroom?” I nodded and she pointed at a door.

Upon pushing the door open, I knew I was out of luck. I entered and closed the door because I did not want to show disrespect. This was no washroom - there was nowhere to wash anything. There wasn’t even a recognisable toilet. Instead, it appeared that someone had installed a urinal by placing it, on it’s back, into the floor and concreting around it.

I couldn’t imagine how to use it.

I exited and the next person took their turn. Leon explained to me, “It’s not an easy task. Take off all your clothing from the waste down, brace yourself with one hand against the wall behind you and hope for the best.”

“We can look for a western toilet in the next town,” Leon said.

In the next town we stopped at a hotel and I was lead to the back, then outside, then around the corner of a building and shown a brick outhouse. The door was around the backside of the building and broken off the hinges. Inside, two wooden slats hovered precariously over a pit of gurgling goo.

I returned to the Prado for another hour of intestinal disrespect.

As we pulled up to the final petrol station, Leon said, “Hopefully this one will have what you need.”

As I opened my car door, I said, “Here goes everything.” Laughs of sympathy rippled out of the door behind me. 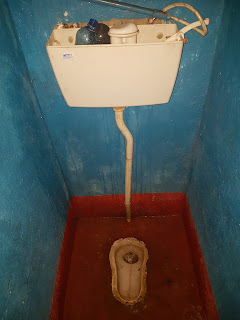 Four hours after my stomach first announced it’s unwillingness to comply quietly, I entered the third toilet block. There, gaping up at me, was a concrete version of the first room. Following Leon’s advice, I removed everything within range. Then, pressing my knees firmly against the walls on either side, I became a world traveller.

The clearest defining line between two sides of the world, has been made clear to me. Those who use squat toilets and those who do not. While it is not an opportunity I will actively seek out, it is one I can now safely negotiate.

Returning to the vehicle, I was in much better spirits. As we joined the bustling Kenyan traffic and continued on our journey, I felt a new sense of solidarity with the wider world and comradery with my three gracious travel companions.