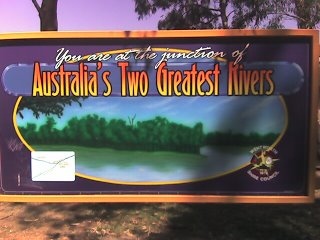 Just past Mildura a town named Wentworth has formed due to the natural phenomenon that occurs there. The Darling and the Murray rivers merge - it's quite a sight! 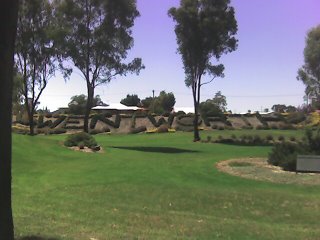 There is also another phenomenon that has occurred as a result of the human presence. The bushes spell things. Smart bushes. Smart people. 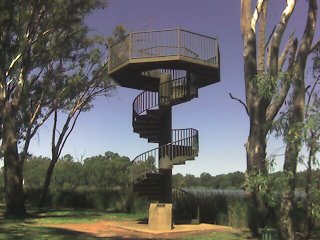 Much akin to the literate bushes is the remarkable stairway to nowhere. Much the same as every staircase I have encountered, it goes up and down (depending on your perspective). Unlike other staircases it appears that the primary purpose of going up is to come down. Very ingenious really. Much like a painted rock with "turn me over" on both sides, this staircase is sure to entertain blondes the world over. 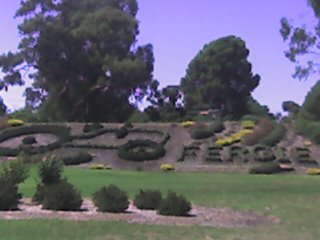 Further bush intelligence can be found (more readily than in America) in the amazing two dimensional rendition of the saviour of Wentworth from yonder year. I hear you saying, "Pardon?"
Apparently the town was nearly destroyed in 1956 when the two rivers swelled due to a flood. The Fergies (a type of tractor) banded together and saved the town by building levies. According to the town clerk of the day, "By God and By Fergie we beat the flood." 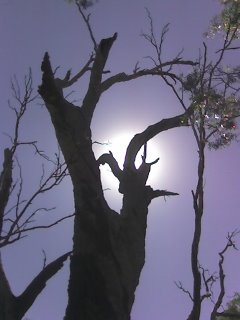 Half way down the walking track to nowhere (it starts just past the staircase of similar purpose) I found the perfect tree! See the halo?