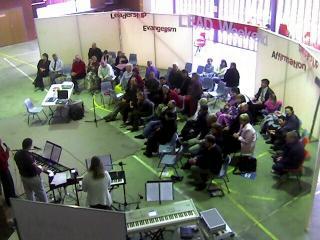 There were a number of highlights at the LEAD Weekend. We had a good sized crowd. There were just over 30 people who came on Friday night and stayed for the entire weekend. What a great group of people! The sharing, singing and networking was great. Of those thirty only a few were from the same church. So the general mix was really good with a few people from many churches. Perfect for a time of learning and networking!

The worship was wonderful. Jason Cook and his worship team led us in times of beautiful music in which we entered the Lord’s presence! Many people commented on the wonderful music.

The three corporate sessions on Sabbath were well attended (over 50 people were in attendance on Sabbath!) Pr Norm Hardy was up first and challenged us with “What everyone should know about and Small Groups.” Next, Julie Westlake inspired us with “What everyone should know about Children’s Ministry.” These two sessions were geared to give people a foretaste of what would be happening in the workshops with these two speakers. Many people said they were encouraged by the two presentations and the workshops ran by Julie and Norm were well attended.

The service on Sabbath was taken by Pr Karl Winchcombe – and what a POWERFUL challenge he gave us! Karl is to personal evangelism what Harley Davidson is to Road Bikes – he is the benchmark! He showed us a clear picture of the Christian life that demonstrated that we are the most effective in our Christian outreach in the first three and a half years after conversion. After those 3.5 years are gone we tend to become institutionalised Christians and loose our connection with the world – therefore loosing our ability to reach the lost. Karl challenged us to constantly look for opportunities to get reinvolved with the lost in order to build authentic relationships so that we can lead them to Jesus. Thank you Karl!

The rest of the weekend was taken up, mostly, with workshops. Pr Kevin Amos ran a very insightful and informative series explaining a model of church health based on the four types of people in our churches ranging from new people to spiritual leaders. Pr Norm Hardy lead a group of people in an exploration of how to make the Bible come alive in Small Group and discussions. Julie Westlake explored evangelism to kids and running ’s that really reach our children. All three presenters were highly appreciated and their ministries have touched ’s church leaders!

On Saturday night we had a games night. It was a bit of Adventist fun! We popped balloons, played with play dough, had some fun with words and even explored some of Ellen White’s evangelism challenges in a game of charades! What a wacky bunch of people! It was great fun!

The weekend was concluded with a challenge from our President to be a “People Winning People.” Thank you Kevin for your ever present model of servant leadership. You are an inspiration to all who know and work with you.

Thank you to everyone who came for the weekend and especially to everyone who made it happen. Dave and Bronwyn McCrostie were wonderful hosts providing delicious food and an ever helpful nature! Soraya was such a very important person in the promotion and presentation of the event. Thank you Soraya! Jenny created a fantastic design for the environment that gave the event a professional look and a functional structure! Thanks Jenny! And especially to God, who was there the whole weekend and lead in everything we did.

See you next year at the LEAD Weekend.