The crazy man is sane and your pigs are all dead 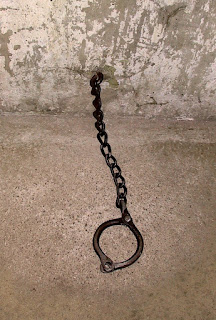 A story is told in which a man possessed by demons meets Jesus.*

The disciples have just pulled the boat onto the shore and Jesus is a few steps ahead of them. As they look past him they see a man, clearly out of his mind, flailing and jerking as he fights to make his way to Jesus. It is as if some force is pulling his body backward while his heart, mind and soul are leaning forward - desperate to get to Jesus.

When the man gets close enough, he falls to his knees at Jesus' feet and cries out, begging Jesus not to torture him. It becomes clear that the man does not speak for himself but as a puppet controlled by a legion of demons living within. The demons recognise Jesus and are terrified of Him. In their fear, they reveal their knowledge of things to come, asking Jesus not to send them into the abyss because the time has not yet come for their judgment. They know Jesus has the power and authority to control them.

Seeing a huge herd of pigs on a hillside nearby, they use the man's voice again to beg for permission to enter the pigs rather than be left unhoused. Jesus gives them permission and they rush out of the man and into the pigs.

There is no knowing what the mind of a pig does as it whiles away the day grunting and grazing but the arrival of the demons certainly did not go unnoticed. The legion's arrival caused such confusion that the herd's mood changed instantly from peaceful to panic. As one, the pigs ran down a steep embankment into the sea and died in the water.

Clear-headed and free-spirited, the man surfaces from the deep fog in which he has been living. He looks up at Jesus and sees his Saviour as if for the first time. The disciples, who have been standing stunned nearby, join them and the man is clothed and fed.

Sometime later, the whole town shows up. The men hired to look after the pigs had run home and told everyone what had happened. The crazy man is sane and your pigs are all dead. The townspeople were not happy. That herd of pigs was very valuable.

After listening, in amazement, to the healed man tell his story the entire town agrees that Jesus needs to leave. His power is too great. Who knows what other damage he will do?

As Jesus and the disciples enter their boat, the healed man asks to go with them. Instead, Jesus sends him home with a mission: to tell everyone what has happened to him. He is to be a missionary to his own people, preparing them for the next time Jesus arrives on their shore.

It is a sad but common truth that Jesus is often sent away. If we are not seeking a better life we will protect what we have and believe the way things are is the best way.

The town that sent Jesus away could have had a miracle-worker walk home with them that day. Each of their lives could have been changed. Their shackles could have been loosened and their demons cast out. But they valued their pigs more than their own man, healed and returned to them. They asked Jesus to leave because they were afraid of His miracle-working power.

Are you so committed to your pigs and profit that the power of Jesus to change your life scares you? What are the 'pigs' in your life? What do you value more than people? If Jesus cast the demons out of a broken family member and sent them home, would you welcome them? What if that person's healing cost you all your precious pigs? Would you ask Jesus to leave, as well?

Imagine Jesus coming to visit you. All the things holding you back - all your demons - are not strong enough to slow you down. Running to Jesus, you fall at his feet and he heals you! He casts your demons out. Then, he sends you home to tell your story. Who will you tell first? What will your story of freedom sound like?