Dare to be a Disciple

Let’s put Christianity aside for a minute. Christianity today is a worldview, a way of thinking socially, politically, religiously and personally. It is an organised form of group think – based on agreed upon (often localised) interpretations of scripture and tradition – which manages behaviour through inclusion and exclusion. That’s not what I want to talk about, so let’s put it aside and look at Jesus. 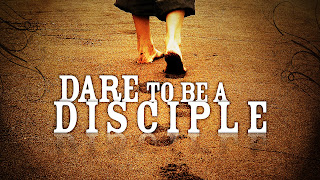 Jesus called his followers disciples. So, in this short treatment, we will call them the same.

Jesus, for those who follow him, is the central figure in history – both universally and personally. As he walked the dusty streets of ancient Israel, Jesus explained his purpose in living among humanity was to give everyone a clear picture of God. Jesus called God “Abba” which means “Daddy.” It’s the first word most babies say, even today.

In summation of Jesus' Abba God, one of his disciples wrote: “God is love” (1 John 4:8). All disciples learn this from experiencing and exploring the life, teachings, death and resurrection of Jesus. Near the end of his life, Jesus prayed for his disciples then and now. He finished this prayer: “I made your name known to them and will continue to make it known, so that the love you have loved me with may be in them and I may be in them” (John 17:26).

Jesus expected his disciples to understand the nature of God because of his words and actions. He had come to show them Abba God was, in a word, Love. Jesus was shocked when they didn’t get it. He asked his disciples, “Have I been among you all this time and you do not know me?” Then he boldly stated, “The one who has seen me has seen the Father” (John 14:9). His disciples struggled to see God in Jesus. God had been misrepresented by the religious leaders as only interested in fearful obedience and ritualistic sacrifice. When Jesus calls people to follow him, he teaches them the truth about God. “Love one another as I have loved you,” Jesus challenged his disciples, “No one has greater love than this: to lay down his life for his friends” (John 15:12-13).

The fullness of God’s love was shown when His Son Jesus was crucified on the cross. Jesus, in death just as in life, showed the love of his Abba God to the world. Before he was fully understood, Jesus said, “If I am lifted up from the earth I will draw all people to myself” (John 12:32). He believed this. His death at the hands of angry jealous mankind was intended to draw all humanity toward God by showing love defeats death, love drives out fear, love conquers all. At the cross, Abba God offers the gift of forgiveness to all, even the men who ordered his death and drove the nails. From the cross, Jesus prayed, “Father forgive them. They don’t know what they are doing” (Luke 23:34).

Years later, reflecting on the death of Jesus, a new disciple – one, like you and I, who didn’t know Jesus while he was on earth – Paul said, “The wages of sin is death.” It always had been. Every Israelite knew they were a sinner and brought sacrifices to the temple to see their sin placed on the animal and to watch as its throat was cut and life flowed out of it. Until, in death, their sins were forgiven, not because of the animal sacrificed but because of their faith. The faith that one day a Messiah would come bringing the fullness of God’s forgiveness with him and ending the wages of sin. What they didn’t know – or didn’t rightly interpret, for it was in their scriptures – was their Messiah would be the ultimate sacrifice. Paul finished this well-known truth with a fresh ending: “The wages of sin is death, but the gift of God is eternal life” (Romans 6:23).

For those of us who call ourselves disciples, our task is to show Jesus to the world so they might be drawn toward him and thus to the love of his Abba God. This is our only task.

Looking at Jesus draws us toward Him. Looking anywhere else draws us away from Him.

Have you ever wondered how Paul was able to let go of so much he had previously held sacred? With his eyes firmly fixed on Jesus he dropped distinctions of class, race, gender, law and power.

How could this disciple let go of so much of what made him who he was? Elsewhere we read Paul was both a Roman citizen and a Jewish Pharisee. He had every right to climb to the top of any stack of humanity in his day and demand people do things his way. And yet, he humbled himself and became “all things to all people.” Why?

Paul believed all people must encounter Jesus who lived to show us the love of his Abba God and died to save all humanity from the wages of sin. Life can only come by looking to Jesus. All else leads to death. Therefore, Paul cast aside as many differences as possible. The only us-vs-them divide worth standing up and shouting about is the one separated by before and after – a personal encounter with the cross of Jesus.

Paul also knew that no matter which side of the cross you currently stand on – before seeing Jesus or after becoming a disciple – you must fix your gaze on Jesus. Look away and you will fall away back into sin, selfishness and death. Furthermore, the life of faith – the disciple’s journey – does not happen in a private bubble. All believers – past, present and future – are watching the disciples of Jesus live their lives. Your focal point is everything.


Therefore, since we also have such a large cloud of witnesses surrounding us, let us lay aside every hindrance and the sin that so easily ensnares us. Let us run with endurance the race that lies before us, keeping our eyes on Jesus, the source and perfecter of our faith. For the joy that lay before him, he endured the cross, despising the shame, and sat down at the right hand of the throne of God. (Heb 12:1-2)

Jesus, The source and perfecter of our faith – That’s the whole thing in a nutshell. If you haven’t met Jesus yet, you will through a disciple who is filled with his love. If you have met Jesus and are a disciple, your faith is being perfected in love so you can show Jesus to those yet to meet him.

“By this everyone will know that you are my disciples,” Jesus said, “if you love one another” (John 13:35). This is one of the many changes that take place in the character of every disciple. First and foremost, we become loving and lovable. Then, because we are looking at Jesus, we become more like him with each passing day.

Separated from the love of God, the Bible and its laws are like acid to the heart of sinful humanity. Forcing the transcript of God’s character into the faces of unrepentant sinners is like holding their eyelids open and forcing them to stare full into the sun. Without Jesus, we have no righteousness of our own to face the requirements of the law of God. Only in the gift of love on the cross can we be saved. Demanding non-believers follow God’s law is the highest form of spiritual abuse. We, instead, should be solely focused on introducing them to Jesus.

Disciples of Jesus, like Paul, put aside all that divides except the cross.

And to that they cling!