Sabbath - From Chaos to Completeness 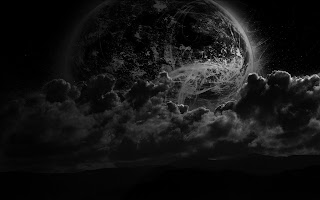 What has been the darkest time in your life?
What/who brought you out of the darkness?
How did you respond to the light?
What changed in you after that experience?

Every new beginning in life is the recognition of a new focus for your time and energy; a master in whom you will attempt to find solace, purpose and identity. How are new beginnings with God different than all other new beginnings?  (New beginnings that start with the true God – the actual Creator and Re-creator of life – will fulf the soul, the heart and the mind. For in Him we live, breathe and have our being.)
How does the Bible’s opening Creation story teach us about the creation and re-creation God wants to do in our lives?

Where was God’s Spirit before Creation week began? (hovering near the surface)
When we are in complete darkness of soul, is it easy to feel the presence and love of others?
If God’s Spirit is always hovering over us, why does He allow the darkness?

Esmerelda Devlin, a famous stage designer says, “You need to start without light to find it.”
What does this mean?

The lights often go off right before something amazing begins. Can you think of one?
(Bedtime - dreams, Sleep over. Movie, Concert – 80 thousand people in the dark, waiting for the light to shine on one person.)

What do you think Earth looked like  when the lights first came on? (Chaos)
When you first came out of your darkest time, what did your life look like?
Chaos looks different for each of us - depending on where we are when we see God hovering above us and start over with "In the beginning God."

What helped you see God hovering above you in the darkness? How can we help others see God?
How has God recreated you? What is He currently doing in you?

Where do you think this Bible Study is going?
Now that the light is shining – what will Creation reveal?

What did we see in these verses? (Creation from Chaos)
What did God create? (A safe environment and filled it)
How did God do this? (with the power of His Word)
God “saw” his work each day as what? (good)
Why does the author say God “saw” it rather than “said” it was good? (leading somewhere)
Why didn’t the author say “perfect” but only “good”? (God wasn’t finished yet. Chaos was still being reformed)

On the first day, God switched on the lights on Project Earth. Under the watchful eyes of those outside the story, He created something good that pointed to something perfect. Who was watching? (Angels, other created beings)

As with any well told story, there is an intended audience. Who was the author’s audience for the story being told in Genesis 1? (God’s people and the surrounding nations)

The Israelites’ Mesopotamian neighbours believed Marduk (the god over all gods) calmed chaos when he defeated Tiamat (goddess of the sea) and then created the heavens and the earth. What impact do you think the story of Day 1 and 2 had on the neighbours?

They also believed Tiamat mated with Abzu (the god of fresh water) to populate the pantheon of lesser gods and then Tammuz (god of food and vegetation) blessed the land providing crops.  Day 3 suggests the Israelite God spoke and the waters separated, land appeared and plants started growing – all at His spoken command! No physical prowess needed. What might the Mesopotamian neighbours have thought of a God who creates with his voice alone?

Day 4 confounded the neighbours’ belief that Anu (creator of the stars  and father of the gods), Shamash (god of the sun) and Sin (god of the moon) were hovering in the sky looking over them. Instead, the stars, sun and moon were created by the Israelite God to provide light and direction and were not Gods at all. Can you feel the frustration rising?

Days 5 and 6 offended a multiplicity of gods. Lahar – the god of cattle; Sirtir – the goddess of sheep; Enten – the god responsible for the ewes, goats, cows, donkeys, birds; (the memory of) Kingu – whose blood Marduk used to create humans – and more.

The neighbours had a god for everything – even beer (Sirtir) and barbers (Ninkamunna) – and were being confronted with the one true God who created everything, everywhere and everyone. The Mesopotamians were accustomed to hearing about other gods and adding them into their understanding of the world around them. But this God of the Israelites was both singular and jealous.

By this far into the story, the neighbours would have been saying, “This God is not like our gods. We cannot add Him to our pantheon. He is either the only God or nothing at all.” And their faith was shaken into chaos. They could not serve their gods and this new one. They had to choose. It was an unheard-of idea – and a difficult one!

Would this story have switched off the neighbour’s lights sending them into spiritual chaos?
How is that a good thing?

How are people today like the Mesopotamians?
To what lesser gods do people give time, energy and attention?

There is one more act of Creation that provided the final sword strike between the Babylonian pantheon and the Israelite God. Every god had a temple. To satiate their worldly needs, worshippers headed to the temple of the god of that need and made their offering. In the middle of each temple – no matter the god - was a statuesque representative image of the God for whom the temple stood. Each pagan temple was designed to focus the attention of the worshipper on the image in the middle of the temple.

The people built these temples to honour their god then worshiped there. Genesis 1 tells the story of a God who built His own temple. His first act, was to switch on the lights so everyone could see what he was doing (without a sun! In John 8:12, Jesus said, “I am the light of the world.” And Revelation 21:23 says in God’s presence there is no need for sun or moon as the glory of God provides all the light needed.) God, the Light, shows up and begins working on His temple. He builds a ceiling and the floor (sky and sea), then the sidewalls (earth and water), then entrance and exit (time: day and night). Finally, after the temple is finished…

What new realisation did you have in your reading of these verses?
How many times was the word “image” used? Why? (so the point wouldn’t be missed!)
These image-bearers were not to stand still but to care for the temple. How? (care, rule)
How good did God see things at the end of Day 6? (very good)

What does it mean to you that God created you in His image?
How does being the representative in the temple – His image-bearer – affect your life?

How many days it take for God to complete his work? (six)
Why have a seventh day? Was it necessary? (Holy rest is re-creation)
In the text, did God ‘see’ the final day as anything? (no)
What did God ‘do’ to the seventh day? (blessed it)
Holy (Heb: qadash) means “Set Apart”.  The phrase “Made it Holy” is actually the same word twice qadash it qadash. Why would the author describe God’s act of blessing the Sabbath as “setting it apart it was set apart”? What are we being told? (Sabbath is important!)

What does God do on His ‘set apart’ day of Creation? (rests from all His work)
In God’s work of recreating us, what benefit is a day ‘set apart’ each week?
What does this phrase mean to you: “set apart I am set apart”?
What might happen if we do not set a day apart and truly rest? (back to chaos)
How important is it to you to ‘set apart’ the Sabbath day? Why?

Genesis 1 introduces a God who takes His people from chaotic to complete, from broken to blessed, from formless to purpose. Slaves in Egypt could become free in Canaan. Prisoners in Babylon could become worshippers in Jerusalem. God brings light to darkness. Jesus is the Light of the world. He defies the gods of the land by rewriting the rulebook. He is not one of many but the one and only.

First God redefines our gods. Then He redefines us. We are His holy – set apart – people.
For six days, we work – serving as God’s image-bearers in His earthly temple through careful stewardship and acts of compassion – and on the seventh day, set apart by Him for one express purpose, we bless what He has blessed and set apart what He set apart by resting with Him and in Him.

Next week we will continue our study of the Sabbath.
Now that we understand where the Sabbath came from, let’s see where it can take us!
at March 06, 2017