“Welcome back,” Mr. Malku said. “I’m glad you could all make it to the Change Agents Group meeting tonight. How was your week?”

Melissa nearly leapt out of her chair. “Look!” she said, “My plaster-cast is gone!”

“The muscles are a bit weak,” Melissa said, “but the bone is strong again.”

“What about the rest of you?” Mr. Malku asked. “Did you bring God’s kingdom to life in the world around you? Did you do anything to declare your identity as one of Jesus’ sheep?”

“Sabbath afternoon,” Chloe said, “a group of us kids went to a retirement home and sang for the people.”

“I checked on the homeless man at Dad’s office,” Stephen said. “I took him a pillow and some marshmallows.”

“I just thought he probably hadn’t had marshmallows for a long time!” Stephen said. “And I was right. He was all smiles and invited me to sit and share the bag. His name is Norm.”

“That’s great stuff,” Mr. Malku said. “Does anyone else have a kingdom story to tell?”

Drake was staring at the floor, studying his shoes. Mr. Malku noticed. “What’s up, Drake? Do you have a story to tell?”

“I guess,” Drake said. “I’m just not used to getting excited about God stuff. It’s been awhile.”

Stephen reached over and patted Drake’s leg, “Tell us what you did,” he said, “I really want to hear it!”

“That first Bible story last week,” Drake said, “about the women with their lamps, really bothered me. The only difference between the two groups of women was one kept their lamps full. I just know I haven’t been keeping my lamp full.”

“What do you mean?” Melissa asked.

“I don’t like Sabbath school, I don’t listen to my dad’s sermons, and I certainly don’t read the Bible or pray on my own,” Drake said. “Well, I didn’t for a long time. This last week, I did—early every morning, so nobody would catch me. I read all the verses we’ve looked at over the past few weeks. I really love this ‘Change Agent’ stuff. It has changed the way I see Christianity. I didn’t think it was for me, but I’ve been thinking. And I prayed about it this week.”

Shane stared quietly at his brother. He was smiling, but his eyes were wet with tears. “I didn’t know that, Drake,” he said. “That is really awesome. I’m so proud.”

Mrs. Malku stood in the kitchen doorway, wiping her eyes. “Dinner is served,” she said.

“And the Kingdom is growing,” the group chanted as they bounded into the dining room.

“I will,” Mrs. Malku said, “Dear Father in Heaven, we thank you for this meal and we also thank you for these wonderful young people who are here to enjoy it. Please bless them and keep blessing the world through them. Amen.”

The group made a quick dent in the pile of food on the table. Soon they were happily chatting with each other as they kept eating.

Mr. Malku said, “How much screen time do you all have each day?”

The entire group looked sheepishly back at him.

“Too much, probably” Stephen said.

“I didn’t mean it to be a guilt question,” Mr. Malku said. “I was just thinking, we live in an information saturated world.”

“That’s for sure,” Chloe said.

“There’s way more on TV and the Internet than we could ever see,” Melissa said.

“How much of the stuff you see makes a difference in your life?” Mr. Malku asked.

They all laughed. “You’re both right, I guess,” Mr. Malku said. “With so much information at our finger tips, knowing something doesn’t mean we will do anything with the information. Have you ever had something you learned actually cause you to change your life?”

“Not from commercials,” Drake said. “And that’s what they make them for.”

“That’s true,” Liam said, “But I have learned lots of stuff from the Internet about boat building and I have applied most of it.”

“Yeah,” Chloe said, “I watch cooking shows on TV and have made some yummy things!”

“I watch videos online of people playing games,” Nic said, “and now I am a better gamer.”

“Well,” Mr. Malku said, “those are some good examples. What is the difference between the information that changes you and the rest of the information?”

“The information that is useful,” Liam said, “is useful because I want to learn from it. I watch and then go try it.”

“Good answer,” Mr. Malku said. “Do you think God wants us to apply what we read in the Bible? Do you think He wants it to change us?”

“The Bible is a revolutionary book meant to transform lives and continue transforming them until Jesus returns,” Mr. Malku said. “So let me tell you something that might surprise you.”

The eating stopped. Everyone stared at Mr. Malku.

“If God took the stories out of the Bible,” Mr. Malku said, “we would only have a quarter of it left.”

“There are that many stories in the Bible?” Drake asked.

Mr. Malku nodded his head as he put a fork full of food in his mouth.

“Why are stories so important?” Stephen asked.

“Maybe a better question,” Shane said, “is why are stories so important to God?”

“I like the stories in the Bible,” Chloe said.

“Yeah,” Melissa added, “I remember the stories better than anything else!”

Mr. Malku’s eyebrows went up like he was surprised. He took another mouthful of food.

“So that’s the answer,” Stephen said.

“God put lots of stories in the Bible,” Stephen said, “because we like stories and remember them. That’s what Chloe and Melissa just said.”

“Out of the mouths of babes,” Nic said.

“Hey!” The girls shouted in unison.

“They are right,” Mr. Malku said. “God created us as creatures of story and He knows how to speak to us! Tonight we are going to explore one of the Bible’s most important stories. Let’s clear the table and head into the lounge room.” 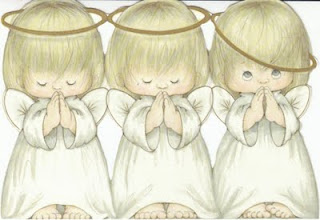 Angel 2: Read—Revelation 14:8
Babylon (the world without God) is utterly fallen and corrupt. How does this affect you? Who does it make you want to become? There are many people who do not recognize the fallen world for what it is. What does this second angel’s message compel you to do for them?

Angel 3: Read—Revelation 14:9-12
How is this final message a call to serving others? What role does patience play in dealing with evil? How do God’s wrath and His love go hand in hand?

“That’s an awesome story,” Nic said. “Imagine if three angels came and spoke to us.”

“I mean for real,” Nic said. “What if three angels appeared now in the lounge room?”

“I see what Dad means,” Liam said. “The story makes it feel real.”

“Yeah,” Stephen said. “After reading that story and talking about it, I feel like Jesus could come at any moment.”

“What is the overall theme or message of the story?” Mr. Malku asked.

“The world is falling apart and we should worship God because He has a plan,” Shane said.

“God always seems to have a plan,” Stephen said.

“What makes you say that?” Mr. Malku asked.

“Every story about God we’ve ever looked at,” Stephen said, “always includes His plan for a better future.”

“That is inspired,” Mr. Malku said. “In my heart, I just heard God say, ‘I have a future and a hope for the Change Agents Group.’ God has big plans for this group.”

The group clapped and cheered.

“How can we take this hope, this future, to the world around us?” Mr. Malku asked.

“We can tell other people about God,” Nic said.

“We can show people the Bible is true,” Stephen said, “by reading it and living its principles.”

“We can write poetry about God and His love, and share it with people,” Melissa said.

“We can create beautiful gardens for people to experience God in,” Drake said.

“We can use our influence to bring change,” Liam said.

“We can sing music that glorifies God,” Chloe said.

“We can take a stand for goodness, and serve like Jesus did,” Shane said.

“I’ll pray,” Shane said. “Dear Jesus, help us to take the Three Angels’ Messages to the world. Help us to take you seriously enough to change the world one act of service at a time. Amen.”