The little plant that wouldn't die

Recently while listening to NPR's "story of the day" podcast I was overwhelmed by an amazing story.

That's the podcast and some further details.

The basics of the story are this: 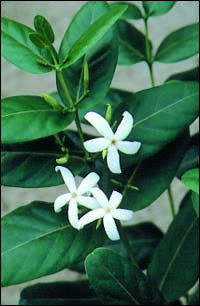 Years later a boy finds the "last" of the species - still alive.

So, the government builds a fence around it.

This makes the people suspicious. They think, "Hey, It must be a magic plant!" So people start climbing the fence and stealing bark, leaves and whatever else the can from the bush to use as a cure all.
So, the government put a barbed wire fence around that one. The people start to think that the plant is cursed and is bringing bad luck to the island. So, they throw things at the plant - over the fence. Things like rubbish and animal corpses. Yes, dead animals!
So, the government puts another barbed wire fence around the perimeter. After more trouble another fence is erected (yup, four) and a guard house is build, a guard is hired and the plant (now on a half-acre compound) is protected.

But, that's not the end of the story.

The plant, although it had been cloned many times (cuttings taken and planted), had no way of seeding because there was no pollen from another plant to polinate with. So, scientists in London (who had taken a cutting 20 years before) devised a "sex hormone" to dust the plant with to encourage it to seed. After much careful experimentation and application the little plant seeded!

Back on the island, something amazing happened. Without any help at all, the little plant seeded. All by itself. The biologists were amazed. befuddled. How had it happened?
After much thought, and being presented the question from a news reporter, a leading scientist said, "Maybe, just maybe, on the very brink of extinction, the little plant just decided to stick around."

Think about it. All the scientific research we do to grow the church. All the hormones - NCD, NCLS, etc - over time, do their work. And then God shows up (as if he wasn't there before!) and the church seeds - a church plant!

And the little church, the one still on the island, build fences around their little plant. They wrap barb wire around it. People start throwing things. The plant gets sick. Then someone decides to protect the church - its doctrine, its history, its tradition. And, after a few years, there is a little church with four fences, a guard house and usually a rather determined guard (or two).
Then something strange happens. God shows up. The plant seeds. As if He wasn't there all along.

Believe it. And, who knows, something just might happen!