of Apples and Pizza

A Compassionate Theology: The Bible 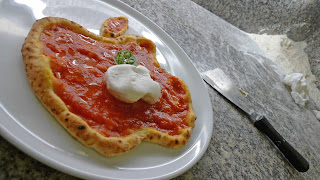 When humans make something, it is done one step at a time.

First the dough. Then the sauce, then the toppings.

When God makes something, He grows it. A baby apple on a tree is an apple. A huge apple, juicy and ready to be picked and eaten, is an apple. And the apple we buy at the store, depleted and disconnected as it may be, is still and apple.

Even though we know the Bible was written by people - inspired by God, yes, but written by people - many of us still think of the Bible as more like an apple than a pizza. Apple-thinkers declare: The Bible was created exactly the way we have it! 3000 years ago, when there were only a few books in existence - it was still the Bible. 2000 years ago, when Jesus was walking the Earth, and the Old Testament was all that existed - still the Bible. And, 100 years later, after Peter, Paul and Mary lived and told their story - it was still the Bible.

The Bible is more like pizza than an apple.

It was laid down a bit at a time. Some sections were written. Then others. Then others. And during this time, it wasn’t all piled up as one book. It was scrolls - in libraries all over the ancient world - a scroll here and a scroll there.

Scholars would find these scrolls, get excited, read them, and as they were exploring the ancient scroll, they would say, “HEY, that’s true! I know that story, but they left out part of it. I guess they didn’t know the whole story, yet.” And so they would get out their trusty editing pen (they weren’t red back then) and add some mushrooms to the pizza. And then, they would share it.

A bunch of church leaders, hundreds of years after Jesus’ disciples lived and died, decided to make all the scrolls into a book. They found the most accurate scrolls (by comparing the many pizzas to each other and saying, “This one looks the most like all the other pizzas.”) and they chose which scrolls should be in the completed work of God’s people. They called this codified creation ‘the cannon’ (because it sounded great and these scrolls were the bomb!) As they studied the scrolls, they put some inside and some outside the cannon - because some of them were more pizza-ish than actual pizza (sorry Focaccia and Calzone, you guys didn’t make the slice).

And cooked the pizza.

And now, we have the Bible.

Handmade by real people, just like you, inspired by God.

As today’s biblical scholars read the Bible, they can see the various ingredients very clearly. And sometimes they can see obvious markings of when a particular topping was added. While olives have been around since before the dove returned to the ark, artichokes are fairly new - and the idea of adding artichokes to a pizza is really new and still considered crazy and uncalled for by many scholars. So, artichokes are a recent addition to the pizza. See how it works?

The history of the Bible - as amazing and intricate as it is - can be (and is being) revealed one piece at a time by very serious and very excellent scholars.

We do not need to fear this.

In fact, it’s amazing! The Bible is being revealed to be one of the most intricate, beautiful, accurate and divinely inspired works of all time.

The Bible shows, without doubt, who humans are. And it reveals, in amazing clarity and detail, who God is.

We can be proud of the Bible.

And we should be!