Friday night I spent the evening with the Canberra National Church youth group. We had dinner, played a hilarious game of "animals" and then moved into Bible Study time.
I have been using a group Bible Study model for a few years now that I call the "Big Idea" Bible Study. I have used it with primary school kids, youth and adults.
I draw a grid with 6-8 large columns - one for each person in the group (unless it's a big group, then I do six and take comments from the willing students).
The format of the Study is
:!?...
Roughly, this means
: the passage
! what big idea that stands out for you
? a question emerging from the !
. . . Answers from the group
The :!? are done individually, then the ... (three answers) are discussion
You can click on these images to zoom in. 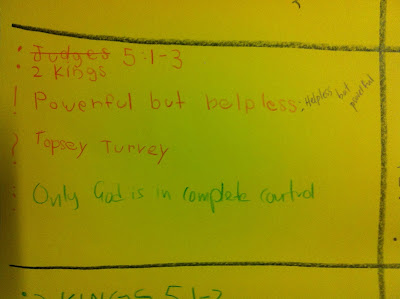 Many of the observations from young people amaze me. This one is a conundrum of God's Control
Powerful but helpless (Naaman)
Helpless but powerful (servant girl)
God's Kingdom is a topsy turvy place!
Cool thought! 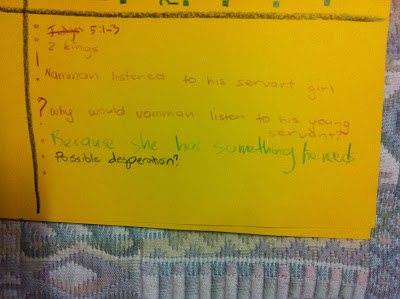 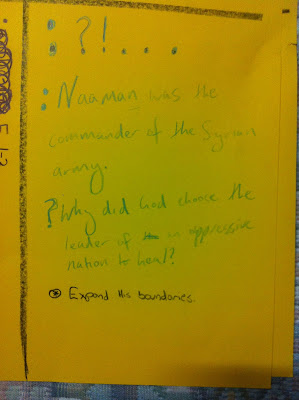 We turned the big piece of paper over and did the four H's of faith - Head, Heart, Hands, Horizons.
This person realized a great truth about God. Sometimes God blesses people who are not his own. Why? To expand his boundaries!
That's an awesome God.
And another cool thought! 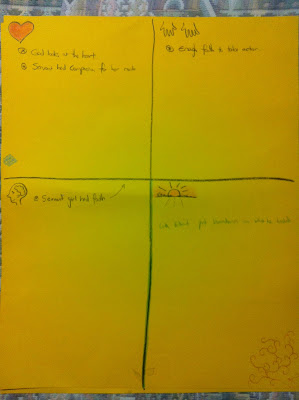 Before introducing the Big Idea concept, I talked about faith being more than "consent". Faith is more than what we "know." It is bigger than "I agree." That is the Head part of faith. But faith is so much more!
I used Jabez's prayer as an illustration of someone who had all four H's of faith fully active.
1 Chronicles 4:10
Jabez cried out to the God of Israel, “Oh, that you would bless me and enlarge my territory! Let your hand be with me, and keep me from harm so that I will be free from pain.” And God granted his request.
Head - Jabez trusted God would answer
Heart - Jabez "cried out" "oh!" He felt it.
Hands - Jabez called God to action & protection.
Horizon - Jabez knew influence comes from God. 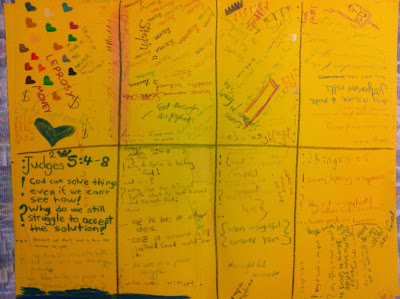