When the Lost are Found 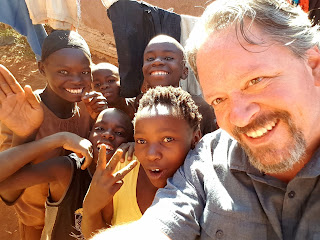 When I returned home from the trip to Kenya, it took weeks to process what I had experienced. The true meaning of it all only became clear the second time I was asked to preach about my trip.

In preparation for my second sermon a few weeks later, God reminded me about the first night’s worship in Kenya. We had arrived in Kapune in the late evening, greeted the children with a touch to the head and then eaten dinner as darkness overtook the rolling hills of Maasai land. As we finished, Leon told us the children would be arriving soon for worship.

Knowing it was late and because I would be speaking through a translator, I wanted to have a quick clear message. I had prepared a lot of talks, but seeing the environment and the kids - nothing seemed right.

Leon had been doing the evening worships with the kids, so I asked him what I should say. “What do they need to hear?”

Leon said, “I tell them the same thing every night. I tell them  God loves them very much. They haven’t heard this before they came here. We have a lot of catching up to do.”

I felt God’s Spirit rest upon my spirit and a message quickly formed in my mind. Luke 15 - When God finds someone He’s lost, he throws a party because God loves each of us. He loves you and you and you! That’s the point of all three stories in Luke 15.

The children filtered in through the entry of our mud hut. Soon the room was full with the 16 orphan children who’d come home for Christmas break, Joseph and Mercy, their five children and the four of us from Australia.

Leon led the children in singing a few songs, prayed and then handed over to me.

“Have you ever lost something?” I asked the kids. A few stories were told from the kids and then we moved into Jesus telling stories about finding lost things in Luke 15.

A Shepherd has a hundred sheep. When he looses one sheep, he puts the other 99 in a pen and goes searching. When he finds the lost one,he picks it up and puts it on his shoulders. He caries it home, puts it in the pen and then throws a party. He goes from house to house, friend to friend, and says, “I found my lost sheep. Come! Celebrate with me!”

A woman has ten coins. When she looses one of them, she searches the whole house. She sweeps everywhere and finally unearths the coin. She travels from house to house telling friends and neighbours the story: “I’ve found a coin that I lost, I’m so happy. I’m throwing a party! Come! Celebrate with me!”

The listeners in Jesus’ day, hearing these three stories would have recognised this final story as the main point. This is the big one. It’s not a one percent loss or a ten percent loss. It is half; half of everything the Father has. The son takes his half, wastes it all and then, broken and in tears makes his way home.

The entire walk home, the son practices his speech: “Father, I’ve sinned against God and against you. I am no longer worthy to be called your son. Let me be one of your servants!” Over and over he repeats this to himself until he nears the property of his Father.

As I told these stories to the children, that first night in the mud hut that would be our home for the next week, I repeated the son practicing his speech three times, “Father, I’ve sinned against God and against you. I am no longer worthy to be called your son. Let me be one of your servants!”

I wanted the kids to feel the struggle the boy was feeling as he walked toward his father’s house. When I repeated it the third time, Joseph looked at me - pausing - as if to say, “Do you really want me to translate it all again?” I nodded.

“The father was standing in front of the house,” I said. “And he saw his son while he was still a long ways away. And guess what he did? He picked up his stick and ran toward the boy.”

Every Masai boy and men carries a stick. It has many purposes. It is a walking stick. It is a prodding stick for cattle. It is a weapon for defense against predators. The children went through their mental list of why the father might have picked up his stick. “The father ran toward his son with a stick!” I repeated. Joseph repeated my words in Maasai.

The kids silently stared at me wide-eyed.

The son saw his father coming. He saw the stick. And he began to yell the speech he had practiced so many times, “Father, I’ve sinned against God and against you. I am no longer worthy to be called your son.”

But before he could finish, his father reached him. He threw his stick to the ground and wrapped his arms around the boy! And then he threw a party! He killed the best cow! And he invited everyone! “My Son is home! He was lost but now he is found! He was dead but now he is alive! Come! Celebrate with us! My son is alive!”

That’s where I finished the story with the kids in Kenya - both times I told it - that first night in Maasai land and 10 days later on Sabbath when I spoke to the students at Hands of Hope Academy.

“God loves you so much! When He finds you - He throws a party!” I told the kids, “There was a party in Heaven the day you were found!” Every child rescued by Joseph in Kapune and Nestor in Eldoret understands the heart of Jesus so much more than most of us who have never been rescued from torture, homelessness or desperation. “You once were lost, but now you’re found! God loves you so much!”

While the heart of Luke 15 brings comfort and assurance to those lost and seeking salvation from oppression, the introduction and conclusion of the chapter make it clear that Jesus was aiming at the minds of rich people who were comfortable with their safe lives. They judged Jesus because he spent so much time caring for the poor, broken, sinful rabble of the world. “This man welcomes sinners and eats with them. So he told them this parable” (Luke 15:2-3). Notice Luke doesn’t say, “he told them these parables” even though there are three stories because it was Jesus’ intent to present one cohesive message from God to self-focused older brothers: “Celebrate and rejoice, because this brother of yours was dead and is alive again; he was lost and is found” (Luke 15:32).

This disconnect between the brothers is the reason for Jesus’ lost and found stories. Nothing gives God greater joy than a found child. Yet in the midst of celebrating the salvation of one, God leaves the party - walking out into the night where the drums and dancing aren’t so loud - to plead with the sibling of the saved. “Please son, love your brother.”

Poverty is, at the heart of it, broken relationships. When God sent his Son to the world, it was to reconnect fallen humanity with the Father in Heaven. Before Jesus returned home to His Father, he prayed for you and I, “Father make them one as we are one.” Paul clarified the primary purpose of followers of Jesus like this: making things right with others as God made things right with us.

The older son, standing outside the party, is in the place of the deepest human poverty. Alone, he refuses the will of the Father to unite the family of God.

Now returned from Kenya, the meaning of poverty is clearer to me. Poverty exists most where relationships are valued least.

The conflict within me about the meaning of poverty is resolved. It isn’t about money. It’s about relationships. If all was right between God and the world poverty would not exist.

I saw some of the richest people in the world while I was in Kenya. Joseph and Mercy, living in Kapune with their children, parents, orphans and neighbours - as one peaceful loving community - are truly rich. The compassionate love and generous forgiveness they have for each other is truly beautiful.

I also saw some of the poorest people in the world while I was in Kenya. From abandoned boys sniffing glue on the streets of Eldoret to eleven year-old girls circumcised and forced to marry; from children forced to run away because of the beatings of a grand father to the politician who “doesn’t even have a cow”, the poverty of Kenya is in her failing and ravaged relationships.

Because of the example of Jesus and the call to do likewise, His followers will be caught up in the work of saving God’s children for the Kingdom. This is done wherever Jesus’ followers are modeling Christlike relationships as they rescue the lost.

We can help by helping those who build relationships both on Earth and in Heaven. This is why I value the work of Education Care Projects Kenya. They are supporting two men - Joseph and Nestor - who are rescuing children from loveless poverty, embracing them with the protecting arms of Jesus and inviting them into the family of God.