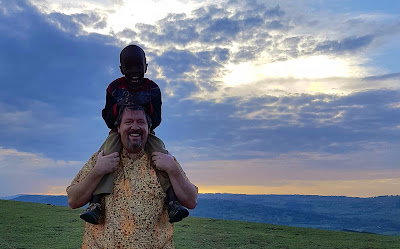 Africa. One word. So many meanings.

To one of every seven of earth’s people, Africa is home. Within her 54 countries nearly 2000 languages are spoken, each representing a unique people group and distinct culture.

Over the past few hundred years, these ancient cultures have been given a crash course in western thought and morality. Along with education and health, westerners brought culture and ideologies which changed Africa both for better and worse.

In Africa, the west is seen as the big brother who could swoop in and save the day, if only he would. Imported via Internet and mass media, a western pop-culture picture is painted of a reality that exists nowhere.

In the west, a starving African child serves as the proverbial picture in the dictionary next to the word poverty. “Eat your dinner,” western parents say, “there are children starving in Africa.” And yet, in reality, many African families live happy thriving lives.

Poverty. The definition written by a thousand charitable organizations parallels the misspelled emails from Nigeria in one word - Money. The Internet abounds with scams and legitimate claims coming out of Africa, each seeking the elixir of western life - money.

Having grown up in the west of the west, I am deeply embedded in this money mindset. In California - the land of Hollywood and Silicon Valley - I was raised believing “you can do anything you set your mind on.” Among my childhood peers “making your first million” was an all too common milestone on their way to maturity.

My first foray into the big world of poverty was a 10 day mission trip to Honduras. Departing my whitewashed private California boarding school with a collection of likewise Nike-clad classmates, we walked dusty roads lined with cardboard houses. The first week of our time was spent, faces covered in concrete dust, building an orphanage. The final few days were spent, eyes squinting through Nikon lenses, exploring the Copan ruins.

From that trip, two stories have remained with me. The first memory is holding a malnourished baby who died days after we returned home. A faded photo is imprinted in my mind cataloging the memory. In the photo, our trip leader holds the baby, smiling and crying at the same time.

The second memory is of a barefooted boy who helped us on the job site. Each day he approached me and said something in the local language while pointing at my work boots. I would offer him my shoes and he would shake his head and wave his hands back and forth. On our final day at the orphanage, a local pastor shared the need for light weight shoes. I returned to my room - as did most of my classmates - and retrieved my walking shoes. Later that day, as we were bundling into the bus, the boy approached and pointed to my boots once again. They were now the only shoes I had with me. I saw the translator and called him over. He explained the boy wanted the shoes I wore the day I arrived. “He’s never had shoes,” the translator said. Finally understanding his request, I had to tell the boy those shoes had been given away that morning. His little face fell. For a week he had tried so hard to get his message through and while willing, I didn’t understand the request.

All these years later, I barely remember the world famous archaeological ruins at Copan. I remember - like it was yesterday - however, the barefooted boy and the starving baby. The emotions I felt are still with me and bring tears to my eyes even now as I write these words.

In the three decades since, I’ve only had a few opportunities to enter places of poverty. While in university, I took a break and lived in the Marshal Islands where I served as an unqualified teacher. As an adult, I rode the train across Australia and drove to outback Western Australia where I told stories to aboriginal children.

On another mission trip during my university days, I met and married a local, thus becoming Australian myself. After that, I stayed in Australia where I studied Theology and worked for the Seventh-day Adventist Church for 15 years. During that time, my wife and I had three Australian babies who are now (mostly) grown up.

Over the past four years, I have spent my working days at Government primary schools where I serve as a chaplain to children, teachers and parents. They have helped me understand that poverty is bigger than just money. There’s something both nearby and nebulous to it. Poverty is to be without. But, without what?

It wasn’t until the trip to Africa recounted in this book that I was able to put my growing understanding of poverty into words. Like all words in a living language, “poverty” is developing in meaning within all of us.

Each of us drag a tale a thousand stories long. Like me, you are the sum total of the stories in your life - not of the stories themselves but of how you choose to tell them.

So, come with me on a journey through Kenya and perhaps you will discover new meaning in poverty, as I did.

This is the opening chapter of my book about my trip with Education Care Projects Kenya to see their work with the children in Maasai Land and Eldoret.