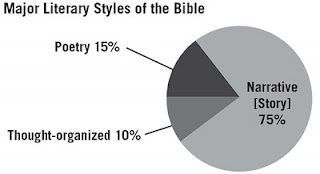 Story is the bedrock of the Bible. It doesn’t matter where you start. Turn to the beginning and you’re faced with two stories of Creation. Turn to the end and you see a seven-headed dragon spewing a tsunami in the desert. Pick a random spot in the middle and you’ll find Nathan wielding the sword of story to smite King David’s soul with self-incriminating judgement, Daniel recounting mirrored dreams of a multi-storied statue to a stressed-out king, a cupbearer explaining to Pharaoh that he knows precisely where to find the man who can interpret dreams, Paul calling himself a fool as he recounts the long list of abuse received by himself for the Gospel, Peter saying silver and gold are out of his reach but the story he has is worth much more, or any number of stories told by Jesus causing one disciple to write, “He said nothing without telling a story.”

Why all the stories?

Let’s imagine, for a moment, the God of the universe loved a little blue-green orb and its sinful inhabitants so much He decided to send His Son there on a rescue mission. They plan the rescue mission in detail. When His Son sets foot, in the flesh, on terra firma the plan is perfect. His approach, His delivery, His every act intentionally communicates in ways these creatures understand perfectly. To be understood is His greatest wish.

God sent His Son telling stories. Sent to reveal the character of God, Jesus brought Love to the world and in so doing saved them from the sin which bound them. Story after story, Jesus laid out the nature of God, mankind, Sabbath, law, love, obedience and more. Ultimately – through His life, death and resurrection – Jesus bridged the chaos between creature and Creator – restoring us by restorying us.

Then, promising us greater power than He displayed, Jesus handed the story to you and I before heading back to His Father. We are only disciples when we are disciple-makers. And we are only disciple-makers when we tell the story. God’s story is told when we feed the poor, when we care for the sick, when we embrace the lonely. We tell the story of God’s Love when we act within His character – communicating to be understood. We are effective as preachers, teachers, parents and parishioners when we care enough to connect people, in ways they understand, to the God who loves them – first by meeting their needs, then by restorying their lives.

The Great Commission is the mission statement of God’s storytellers – His disciple-making manifesto. We grow the Kingdom of God when we restore and restory lives. Bringing people into the Kingdom, baptizing them into God’s story and teaching them to seek to be understood - we send these disciples out with a story worth hearing.