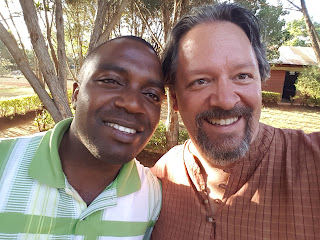 In 1994, only eight years old, Nestor and his family were forced to flee their homeland of Rwanda. On foot, in the crush of thousands of other genocide displaced families, Nestor moved along with the momentum of the crowd for hours. When evening came, he could not find his parents.

It wasn’t until returning home, one year later, that Nestor was reacquainted with his siblings and parents. Nestor’s two sisters and four brothers had all managed to stay with their parents during the year. Only he had been lost.

“I know what it is like to be an orphan.” Nestor said, “I was one for a year. It is very scary and hopeless.”

The walk was long and difficult. Many did not have the stamina or strength to survive the stress and loss of becoming a refugee. “I saw people die as we walked.” Nestor said, “People just fell over. There were piles of dead bodies on the road.” Some died from the physical exertion. Others died from the torment of reliving, with each step they took, the deaths of their loved ones.

“My parents put me in an Adventist High School. I became an Adventist at the school and combined my love for sport with the Adventist health message.”

During his year of living so close to the death, Nestor developed a passion for life. His focus on health from that year and through high school shaped him into the person he is today.

While running health camps in Eldoret, Nestor taught some street children. “One of them asked me if I could help them go to school.” Nestor said, “I didn’t know anything about schooling in Kenya, so I started asking around.”

“I asked some friends if they could help me pay for just one.” Nestor said, “I took her to a nearby orphanage. From then on, many street kids became my friends and asked if they could go to school. I began helping children go to schools in the Eldoret area. I started an organisation called Hands of Hope East Africa and we placed almost 40 students in schools over the next two years.”

Leon and Carole Platt were involved in sponsoring children at one of the orphanages and Nestor heard about them through an Australian man named Colin Hone.

When they visited Nestor's Hands of Hope children both Leon and Carole knew they could really be happy helping to support a school like that. From Australia they kept in contact with Nestor and he found and began renting the current school site. “We named it Hands of Hope Academy and began filling it with children.” Nestor said, “In the past two years we have grown to 63 students.”

“Hands of Hope is a place where the children can be free to be educated and live a biblical healthy lifestyle.” Nestor said, “When we started the school we brought the 54 sponsor children we had placed into other schools into the new environment and gathered a few new ones from the streets.”

“I teach the students both sides of each health choice.” Nestor said, “I do not demand obedience. I allow decisions to be made. The freedom of choice is very important. Many people here in Kenya like my message because I do not point my finger and demand obedience. I give them a positive alternative and let them choose.”

At Hands of Hope Academy children are taught the health message and given healthy options and the freedom to choose. “About half the students are vegetarians now. All of them live a chemical free lifestyle - free from drugs, alcohol, caffeine.” Nestor said, “They have gardening responsibilities and plenty of room for sport and play.”

“We are raising them in as close to an Adventist home as we can get in a school setting.” Nestor said, “Last year 32 students were baptised!”

“We don’t push the children.” Nestor said, "As the director, I could do that. But when they become adults the will go back. When they make the decision for themselves it is more likely to be permanent. That’s how we do it here.”