We’ve already met little Vivian. She is the beautiful seven year old girl who rolled and chipped her ankle Thursday night, running down the hill in the dark. 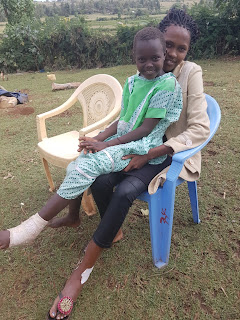 Sunday night, Joseph sat with Carole and I and told us why he rescued little Vivian. Carole already knew the story because Joseph had told her all about it when he called to check if ECPK could sponsor Vivian’s future before he attempted to rescue her.

When you see Vivian’s deeply trusting eyes, her happy face and gentle personality, it is hard to believe she has come from such a terrible place. Just yesterday, while listening to the choir sing and dance, Little Vivian sat next to me, her bandaged food resting on a chair in front of her and her head resting on my arm which was draped across the back of her chair.  She was completely at peace trusting me, a Mzungu man she had only met this week.

When Vivian was two years old, she watched from the corner of the room as her father beat her mother into unconsciousness. How many times Vivian had seen her father do this is unknown but one thing is sure - she remembers watching. “Still,” Joseph said, “Sometimes she is crying because she remembers.”

When Vivian’s mum didn’t wake up, she was taken to the hospital where she died. Because Vivian’s mother had been from a different tribe than her father, no-one around her wanted to care for her once her mother was gone.

Not wanting to accept the murder for what it was, the man’s family did not have a burial service for Vivian’s mother. “The buried her like a dog.” Joseph said, “Just in a hole with no service.”

When word got back to the Vivian’s grandmother that her daughter was dead, she came to claim Vivian and her three month old sister. When she arrived, the parents of Vivian’s father tried to give her a cow to replace her daughter. She rejected the cow saying, “A cow is not worth enough for my daughter.” She then asked if she could have the two children.

Vivian’s grandmother went home without her granddaughters and without any sense of closure about her daughter’s death. She had put together that there was a murder because of the stories she heard and the way she was treated.

The girls went to their other grandmother instead. This grandmother had no compassion on the children and treated them poorly. Within the year, she decided to make some money by selling Vivian to a barren woman. A dowry was paid for Vivian and she moved into the home of the barren woman.

In primative Maasai culture, barren women can take a girl to be their wife. They raise her and train her to be a good wife, to bear children for them - to continue their linage. Some girls are taken very young. These girls are called the barren woman’s wife because they physically replace the barren women over time. Vivian was being trained to be a surrogate womb for this woman.

In their years of prepubescent training, the girl will often sleep alongside a man of their ‘wife’s’ choosing - not for sexual purposes but to help them become a woman faster. Primative Maasai believe that a girl will grow her breasts and hips faster if she is sleeping next to a man. This makes her ready to have children as soon as possible.

Barren women marrying young girls as wives is still very common today - even among modern Maasai. It is perceived as the only way out of barrenness. “This is child slavery.” Joseph said, “This child, as soon as she is old enough to bear children, will be sold for the night to whomever her ‘wife’ demands. She has no rights.”

“Vivian had been told by her wife,” Joseph said, “‘We are the only people protecting you. Everyone else will murder you like your mother.’ The brainwashing, in four years with no school and all these lies, leads to the girl believing this is the life for them.”

The elder of the local Adventist church was a woman who knew Vivian’s ‘wife’ and was trusted by her. She came in and out of her house as a trusted friend. The elder also was a friend of Joseph. She called him and told him Vivian’s story. She said, “If we do not rescue this girl very soon, she will be brainwashed for life.”

Joseph called Carole and asked if Education Care Projects Kenya had received funds recently and could support one more. He told Carole the whole story and due to generous donors, Vivian’s safety, clothing, schooling and basic needs were assured.

“When I first started,” Joseph said, “I wanted to save just one life. Each time I do, I start again. Vivian is the one life, this time.”

Sponsorship assured, Joseph called the elder and told her he would come rescue Vivian. The elder went in for a visit while the barren woman was doing chores and told Vivian, “God is sending a special man to save you. He will take you to a safe place.”

“Vivian was already believing the brainwashing,” Joseph said. “The years of hatred from her father and grandmother and now the fear of death instilled in her by her ‘wife’ - she was not willing to be rescued.”

The elder continued visiting Vivian until she saw hope in her eyes. She called Joseph and said, “She is ready to be rescued.”

“It was a very small one room house.” Joseph said, “Very poorly built. I rescued her at night. The barren woman was sleeping in then man’s house who was helping train Vivian. The elder and I quietly went into the house to rescue Vivian from where she was sleeping, alone.”

“I took her straight to the school,” Joseph said, “It was her first time to wear shoes. First time to sleep on a mattress.”

“I reported the rescue to the government.” Joseph said, “While they appreciate what I am doing, they fear the cultural consequences. It is a difficult situation.”

As he was telling us Vivian’s story, Joseph mentioned another barren widow to Carole who also has a young girl as a ‘wife’. Carole was amazed. “But she is a lovely lady!” Carole exclaimed, “How can she do something so horrible?”

“She is destitute.” Joseph said. “No-one will care for the widows and she believes she must care for herself in this way.”

“But she is an Adventist,” Carole said. “She needs to find a better way!”

“Will she?” Carole asked.

“She will,” Joseph said. “She is. She is telling me she is only raising her like a daughter now.”

“Oh, Joseph,” Carole said, “We really need to do more for the widows. Don’t we.”

“We are trying.” Joseph said, “We give them work to do and pay them. We provide some food. We are rescuing the widows, too.”

If you would like to help rescue children like Vivian from child slavery and widows from such abject poverty that drives them to this end, please donate to Education Care Projects Kenya. Every dollar comes to the work here in Kenya. There is no costly organisation taking a cut. It’s just Carole and Leon Platt, and many passionate volunteers, donating their time and energy - and here in Kapune, Joseph and Mercy changing the world one person at a time.