Yesterday, on our final full day here in Kapune we had a number of walk-ins. The stories of the Mzungus teaching about Jesus and helping children was reaching the areas further than our daily visitors were walking.

Mid-morning four children walked in. Joseph explained that the oldest girl, Purity, was expected. Her grandmother had called the night before telling him about Purity and asking if she could meet the Mzungus. Once it was clear that she was coming, Purity invited three street children to join her. Their mother is mentally handicapped, spends her days eating food scraps off the road where people throw them and occasionally becoming pregnant due to men who take advantage of her simple mind to get to her body.


As we sat before the four children, who had walked 20km to reach us, we heard their stories as Joseph interpreted their questions. Purity is 13 years-old and lives with her grandmother. Her parents are both dead. She loves school and wants to go to High School this year but grandmother cannot afford it. “If no-one takes her,” Joseph said, “she will be married.” The grandmother considers her job finished. She is ready to move on to marriage or education.

The other three children, Angela (13), Faith (10) and Amos (6) are looking for education as well. They are being cared for by family as their mother is unable to care for them. Angela will most-likely be married off to provide for her mother and siblings. When faith reaches 13, the same thing faces her. All three of them are only receiving education when the problems of life allow them to attend the local government school where the education is very poor.

As the children went outside for photos - to be used to find a sponsor - Joseph poured his heart out to me. “How do I know who God wants me to take?” He asked. “These three with the sick mother are just like baby birds fallen out of a nest. They are needing help to live.” Joseph paused. “I am taking phone calls and walk in’s like this so many times - maybe three times a week - and I add them to my book, then an emergency comes where I must act.” Joseph clearly overwhelmed by the scale of need in his community continued, “I ask God to give me direction so I know what to do.”

As the first meeting finished and we broke for lunch, Joseph approached me, “A handicapped woman has walked all day to get here. She wants prayer.” Carole, Courtney, Joseph and I gathered in the mud house lounge room and received the woman and her friend.

Rose lost the lower half of her left leg to a horrible infection caused by a thorn. After it went black, she went to receive help. Living so far from town and even further from medical attention, small injuries become life threatening illnesses often. She was told she would die if the dead part of her leg was not removed. The leg was amputated last March. Her prayer request was for strength and courage. 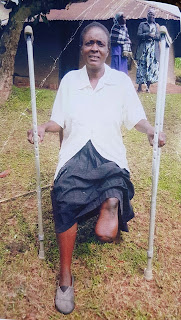 Rose lives with her husband, a school teacher in their village, and five children aged between 2 and 18. She is very proud of them but frustrated that she cannot care for them as she used to. We each took turns praying for Rose and then gave her words of comfort - telling our own stories - and encouragement. Then hugs and handshakes were exchanged and Rose stood with the aid of her crutches and left. 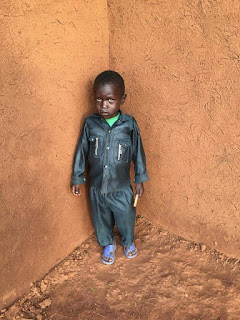 Later that afternoon four more children arrived. Brian (4) is the child of a teenage rape. He has lived with a kind lady with a large but poor family in his village. His mother ran away in shame the day he was born. He is ready for school but has no family to fund it.

Miriam (12) is being looked after by her aunt as her mum, also, ran away in shame after her birth. She is in school and doing well but seeks sponsorship for a boarding school where the educate and care is much better than government schools.

Charlene’s (14) mother died giving birth to her and her father ran away because he had no wife. She lived with her grandmother until she was 2 years old and was then given to her older brother. Much older than her, he has a house but no wife. It is clear that Charlene has been taking care of all the wifely duties in the home of her brother since she went to live with him. Charlene would love to go to boarding school.

Lekini (13) was asleep in bed next to his two brothers when seven men broke the door down and hacked his brothers to death. They left Lekini with three huge knife cuts on his head and a gash on the top of his forearm from wrist to elbow. Thinking the three boys were dead, the men went outside the house and sang a victory song before disappearing into the night.

Joseph was called and he carried the dying boy on his lap for the next 10 hours as they tried to find an open hospital which could help with such severe wounds. “Most of the skin on top of his head was hanging off the side,” Joseph said. “This boy is a miracle. He bled so much. But he is alive because of God.”

As Lekini sat before us, seeking sponsorship, he told us he wants to be a lawyer one day. The police have told Joseph they have the names of all seven men, “But who will be a witness?” They asked him. The stories have been told, but the crime was not witnessed. Only with a witness can these men be tried. No wonder Lekini wants to be a lawyer.

As Lekini walked out of our mud hut, our hearts were heavy. There was so much need revealed in just one day. Carole asked me a few times over the evening, “What will your blog be about tomorrow morning?” I said, “The walk-ins we had today.” During the night, Carole couldn’t sleep. She was so deeply affected by Lekini’s story, she wrote it up and placed it on Facebook.

Lekini, who has been living with his uncle since the attack, has been invited to come back to Joseph’s house today. We have something wonderful to tell him. By the time the sun rose here in Kenya, a friend of Carole and Leon in Australia read the post and was moved to help. Lekini will be going to school today.

Today is the first day of school. All of the children in Joseph’s program who have been on holiday for the past two months are heading back to their schools of safety and education.

Purity stayed the night, intending to walk home today. Instead, due to another amazing sponsor found overnight, Carole and Joseph told her this morning that she will be walking to school with the children.

“She was beaming!” Carole said.

“Yes, she was most excited!” Joseph added.

Today, two children - Lekini and Purity - will not return back to their lives of trauma but will be sent to receive an education. “They need hope,” Carole said. “Education gives them a hope for the future because they can choose a better life.”

Angela, Faith, Amos, Brian, Miriam and Charlene have headed home where they will hope for sponsors who will send them to school, giving them a hope and future.