On my first day among the Maasai, Joseph told me a story about a local politician who was trying to win the votes of his fellow Maasai people. He told them he was just like them and held the same values. He said his family meant everything to him. But, Joseph said, “We know this is not true because he doesn’t have even one cow!” 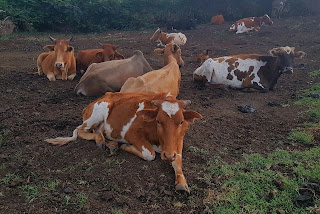 Joseph explained that the man is rich with money and has a big house. He sends all five of his kids to private boarding school. “But without cows,” Joseph said, “we know he does not really love his family and is not a true Maasai like us.”

Last night Joseph sat down with us Muzungus and explained the importance of the cow to the Maasai. Yes, every cow has monetary value. A small adult cow costs about 20,000 shillings (about $2,000 USD) and a large bull at it’s prime is worth 60,000. But the monetary value of the cow is a very small part of why Maasai have cows.

“How many cows will you have received by the time you are adult?” I asked.

“What about now?” I asked, “Do Maasai still value women as possessions?”

“Only the primitive Maasai.” Joseph said, “The modern Maasai man chooses his own wife and treats her with equal respect. And he loves his children. But we still give the cow!”

When a primitive Maasai man is shown a wife by his parents or modern Maasai man chooses a wife for himself, he then takes a cow to her father as a gift and says, “I wish to talk to you about marrying your daughter.” Then they agree on a dowry. Joseph explained that the dowry is consistent in each clan and the dowry you pay is the one of the clan of the wife to be. They do not change the dowry based on their perception of the suitors wealth or the brides beauty. “Some clans it might be 7 cows.” Joseph said, “Some it might be 14 cows. Some more.”

“No!” Joseph smiled, “Because it is just about the wife’s clan. I gave 20 cows for my wife. And once I am married, I follow the wishes and rules of her clan. I become part of her family.”

Once married, the Maasai man gives a cow to his new father in law to be allowed to eat under his roof for the rest of his life. If he does not give the cow, he can never eat in his wife’s father’s house. This special cow also means that a Maasai man is a full adult. “If a man does not get married,” Jospeh said, “he cannot be a full adult.”

“If you, David, are not married but wish to shake the hands, you will take a cow to the most respected man in your community. That man - who is very much respected by all the community - will tell everyone that you have given him the cow and are now to be respected as a full adult.”

Joseph explained Massai men and women are catergorised in age-sets. Children are to show respect by offering the crown of their head to be touched by anyone in a higher age-set. When you leave childhood the touch moves to your shoulder. When two full adults meet, you shake hands.

“How do you know which age-set a person is in when they approach you?” I asked.

“They will offer you the correct part of their body,” Joseph said.

I have seen this many times over the past few days. Now I understand. Most of the children, when they approach me, make eye contact until they are about a metre away then they look down and step closer. I had thought they were shy. They were actually showing me respect and requesting that I receive that respect with a touch.

“What if you touch the wrong part?” I said.

“You give a cow!” Joseph said. “If I touch a married woman’s head, I give a cow. If a child touches someone in a higher age-set on the head, their parents must give a cow. Even if someone else sees it happen from afar, they must report it to the child’s father and a cow must be given.”

“Respect is very important to the Maasai,” I said.

“So much important!” Joseph said. “Without respect the whole community is not strong.”

“What if you one day, you give the cow to me because my child got good grades, and then the next day I gave the same cow back to you for another reason?” I asked.

Joseph laughed. “I have never heard of such a thing happening! But, it would not matter. It is your cow when you receive it. You can do what you wish. You can even sell the cow the next day. No offence will be taken.”

“So it’s ok to sell the cows,” I asked, “If you want money to buy something else?”

“Yes, of course,” Joseph said. “But every cow you sell makes you less able to show respect to others. And a small heard means you are not much respected by others.”

“So a Maasai man wants to keep his cows,” I said.

“The primitive Massai believed,” Joseph said, “that there was once a beautiful valley, like the garden of Eden you talked about yesterday, where the Maasai lived. On one edge of the garden, there was a very high cliff. One day all the cows were created on the top of the cliff. The cows jumped down into the valley. This means all cows are given by God to the Maasai.”

“All the cows in the world?” I asked.

“Yes!” Joseph said, “Every cow in the world is first a Maasai cow.”

“That’s a great story!” I said, “It shows that the Maasai believe God respects and loves them.”

“True!” Joseph said, “But it has a bad side too. If a primitive Maasai man wanted to be a real brave man, he would steal the cows from tribes who were not Maasai.”

“Because the cows were God’s gift to the Maasai!” I said.

“Yes,” Joseph said, “But this is not the way of the modern Maasai. Stealing is against the law and brings disrespect.”

“There are many other reasons a Maasai gives a cow,” Joseph said.

If a Maasai does something to anger another Maasai, they can give a cow to cool the other person’s anger, so they will respond kindly. A respected family member, not involved in the conflict, can also bring a cow to ask the offended person as a plea.

“For example,” Joseph said, “if a wife has an affair, the wife’s father gives the husband a cow then says, 'please consider carefully. You are both my children.’ This usually helps.” The decision still belongs to the offended party but the cow softens the heart and invites careful reflection. It also shows the respect of the family member who gave the cow.

If you injure someone, a number of cows is required. Every part of the body has a price in cows. “If you draw blood from any other Maasai in anger,” Joseph said, “you must give one cow.”

“What’s the worst thing?” I asked, “What requires the most cows.”

“Murder,” Joseph said. “If you kill another Maasai, you must give 49 cows.”

“That could take all your cows!” I said.

“Yes,” Joseph said. “But a Maasai must respect other Maasai.”

“It certainly explains why you are such gentle people!” I said. “A few generations of living like this and you would learn to be gentle and show respect to everyone.”

“True,” Joseph said. “There is one more time a Maasai man gives a cow. It is a very special ritual. It is when one man chooses his Olkiteng Loolbaa - a very special friend. This friend is your equal. You tell him everything and he tells you everything. If this man tells you to do anything, you must do it.”

“My Olkiteng Loolbaa helps me do the right thing.” Joseph said, “He will challenge me when I do the wrong thing. I must do what he says. If I do something wrong - he will go to the panel of elders to seek wisdom. Then he will bring their wisdom to me. And I do the same for him. A Maasai can never be a leader in the community without having an Olkiteng Loolbaa.”

Joseph then explained the process of choosing a life long Olkiteng Loolbaa. “Once a Maasai man chooses his special friend, me must sit with their family and tell them he has chosen their son to be his Olkiteng Loolbaa. The family must agree before you choose this man. They will tell you if he is a man of respect worthy of being your Olkiteng Loolbaa.”

“Then you have a special ceremony. “In the ceremony you bring a perfect full grown bull - no blemishes on it’s coat or anything wrong with the bull, like a bad eye or something. This bull is slaughtered and a party is given for everyone from the age-set and both families. After the celebration, they give each other a cow each.”

This choosing of the Olkiteng Loolbaa is central to the respect culture of the Maasai. They both a mentor and accountability partner that seek and give wisdom to each other for the rest of their lives. It is an agreement of goodwill - ensuring the community will be strong.

In Maasai culture, the cow is everything. It is the glue that holds community together. It is the currency used to maintain relationships and show respect. Child or anyone in an age-set lower that the full adult dies, they are buried next to the house. When a full adult dies, they are buried in the cow pen. “It is a sign of the greatest respect,” Joseph said. “We will not even move the pen to another place for more that one month.”

A Maasai man who has all the money in the world but has no cows is not a real Massai. “A house is not a home,” Joseph said, “until it has a wife and a cow.” The lack of cows near this politicians house demonstrates that he has been shown no respect by others. His lack of cows also means he can show no respect to his children or anyone else in the community. And when he dies, he is buried in shame.