Living with the Maasai

Living here with the Maasai is a very peaceful and enjoyable experience.

Each morning, I wake before dawn and walk out of our mud hut and down the hill to the toilet. When it is dark here in Kapune, it is VERY dark. There is no power, so there are no lights other than the stars. There is a solar panel on the roof that provides enough power to charge devices and run two small lights - one in the kitchen and one in the lounge. There has been no moon for the past two nights, so it has been an amazing display of stars!

After walking back up to the house, I get my iPad and spend a couple of hours writing. The first sound heard each morning can be heard all night - the tinkling of the bells around the necks of the cows in the pen. As the sun rises, so do the roosters. Then the cows begin lowing and the children awake. The sponsor kids sleep in a room filled with bunk beds just in front of where I sit to write in the lounge. They come out, one by one, to head out into the morning air. Those who remain in the room chat and giggle to themselves. One little boy just came out struggling to zip up his hoodie. He walked over to me for a hug and then I zipped him up.

The children understand more English than they can speak. While English is the primary language they are educated in at school, the majority of the time they speak Maasai or Swahili. Joseph likes to joke that the kids thing Swahili and English are the same. They speak a mixed jumble of both.

Maasai children greet adults by offering you the top of their head. The adult then places their hand gently on the child’s head and says, “Supa” which means “Hello.” On the first day, when we arrived all the children greeted us as we exited the Toyota Prado. After greeting them in their way, I said, “Let me show you how I greet the kids at my schools in Australia.” Then I offered them my hand for a high five. Once I got across the language barrier I got some good hard high fives and lots of laughter. But, later, when I lifted my hand for a high five as I approached any child they would see my hand and offer the crown of their head. So, today I’m going to try a low five (under hand) and see if I can get some!

Once the Muzungus (white people) begin to wake, the preparations for breakfast begin. The small kitchen area is behind the lounge room, between the back three bedrooms. Any cooking is done on a gas stove or on small fire pots. The children bring us one of these pots of smouldering charcoal before each meal. 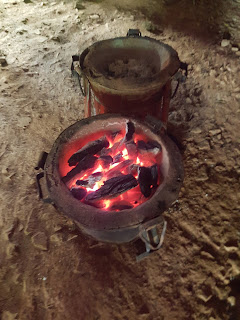 Breakfast for the Muzungus consists of porridge, cereal and toast. It is filling and delicious. The children all head down to Joseph and Mercy’s house for meals. Due to the very real possibility of getting typhoid from the local water, all food preparation for Muzungus is done with bottled water brought in from the city. The Maasai stomach is used to the local water. So, we prepare food and eat separately.

It is almost 8am now and two girls have just come in with makeshift brooms (they grab a handful of palm fronds or a tree branch) and are now sweeping the mud floor. Next they will bring water and douse the walking area to keep down the dust during the day. 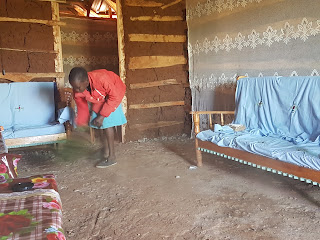 In the two daytime meetings yesterday, Joseph and I told the two Creation stories in Genesis 1 and 2.

Before lunch, as a gentle breeze blew and the warm sun shone on the rolling hills, Joseph and I explained how the first Creation story is about God creating good life from chaos. He starts with the mess we are in and, once we say “I see you, God” (in the beginning God) He says “Let there be light” and then there will be light in your life. And as he continues a ‘good’ work in you he leads you to rest in Him. From chaos to meaning. From suffering to Sabbath.

After lunch, after watching the Kapune Church Choir sing and dance in traditional Maasai fashion for nearly an hour, Joseph and I told them the second Creation story. God has a plan and a place for us. From the dusty dirt of lonliness he creates life - creation, creatures and community. His plan is that we live in positive relationships - a cord of three is not easily broken. When we love Him first we will love others not as above us, or below us but as equals. All of us - created in the image of God - to live in relationship with Him and each other. There were some really fantastic questions from two women after we finished. They wanted to know, if God created woman from the side of man, as an equal, why are there so many abusive husbands? So, Joseph and I began telling them the Great Controversy story. My answer, simply, was, “The way you treat other people shows which game you are playing - God’s game of putting Love first, or Lucifer’s game of putting Self first.

Today, the first meeting will happen sometime mid-morning. As Joseph says, “Kenyan time is not like Muzungu time. We are not so concerned.” And it’s true! Yesterday’s 10am meeting started just before noon. It really doesn’t matter because the people are relaxed happy people and they come for the day.

They walk everywhere. And many of them live kilometres away. So, they walk a lot. Many of the people who come to the meetings walk for more than an hour to get here. And they walked home afterward. And they will be back today. It’s a peaceful slow life. It’s beautiful really.

The Maasai people are 100 per cent about community. They do everything together. And they take their time. Just now a group of girls came in to take the chairs (Brought up last night for worship here in the lounge) back down to the meeting tent. 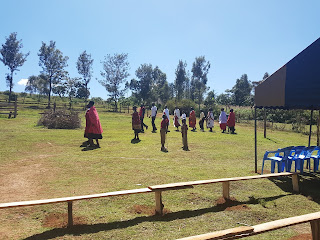 Before and after the morning and afternoon meetings yesterday there was a choir singing and dancing to music they had prerecorded. They danced and sang for hours over the day. Every service was embraced by music. Those who sing and dance do it with joy. And those who watch, do so with respect and interest.  Joseph said, “The music will be much better tomorrow. Many people could not come because of a funeral.”

The writing of this post was paused as Joseph in to tell us more about Maasai culture. I have just learned about the value of cows, the dowry for a wife and the system of respect for elders. That will make an interesting chapter in the near future.

Last night, after night had fallen, the children started coming into the lounge for evening worship. Most of the day’s visitors had begun the long walk home but some of the children had staid for the night story. 51 people packed the small lounge room in our mud house. They sang so beautifully, danced with joy and laughed throughout. Then, Joseph and I told them how much Jesus loves them. 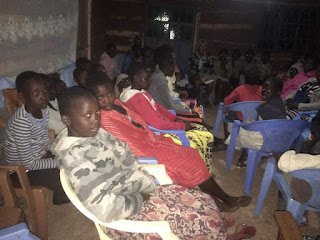 After closing with prayer, many of the children began their long walk home. The Maasai can see in the dark much better than we Muzungus. Joseph explained to them how to be careful on their way home and invited them all back for the next day’s meetings.

It’s 10.04AM, the morning meeting is due to start. Joseph just walked in and I asked, “Are the people showing up?”

“Yes! They are showing up.” Joseph said, “I am expecting them by ten o'clock.”

We laughed together and Joseph said, “We say, there is no hurry in Africa!”