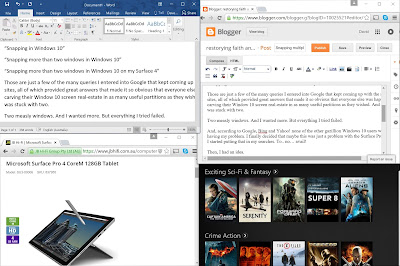 Have you ever had a problem, that no matter how you worded it in the search bar, Google just kept bringing back the same – almost useful - answers? At first you think it’s because you are not wording the question right. Then you decide you need googling skills. Surely, it can’t be that more than a million other earthlings using a Surface Pro have never had this issue. There MUST be someone else out there having the same issue! Maybe, but as far as I could find, they haven’t discovered blogging…

Those are just a few of the many queries I entered into Google that kept coming up with the same sites, all of which provided great answers that made it so obvious that everyone else was happily carving their Window 10 screen real-estate in as many useful partitions as they wished. And yet, I was stuck with two.

Two measly windows. And I wanted more. But everything I tried failed.

And, according to Google, Bing and Yahoo! none of the other gazillion Windows 10 users were having my problem. I finally decided that maybe this was just a problem with the Surface Pro and so I started putting that in my searches. To.. no… avail!

Then, I had an idea.

I loved tablet mode so much that I told my Surface Pro to leave it on all the time. It looks nicer. Less like a computer and more like a tablet – which I prefer. Turning tablet mode off allowed me to snap to all four corners, drag the windows into whatever shape I wished and use apps together in ways that boost my productivity (or at least allow me to believe that my productivity is boosted enough to deserve another coffee, lol).

So, I thought I’d put that little measly-easy-squeezy-solution to an irksome-plague-of-a-problem that besought me (alone?) for more than a year – through my Surface Pro 3 days and into my Surface Pro 4 days, just because I like my tablet soooo much that I wanted it to be a tablet in all circumstances.