We have been awaiting this special day for over a year!

Linda is blessed to live on the shore of Seven Mile Beach and was able to have a large group of friends attend her baptism and then stay for a BBQ afterwards.

Here are a few photos of the special moment! 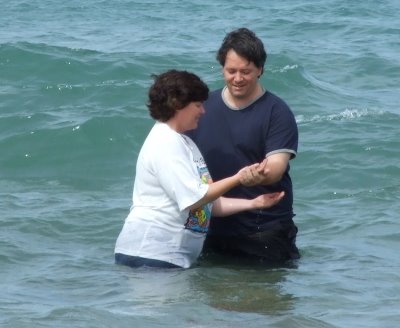 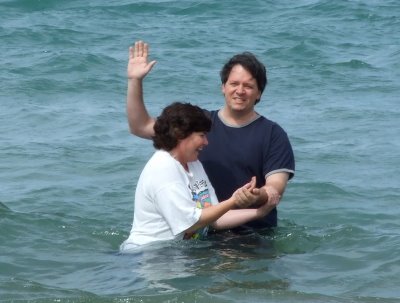 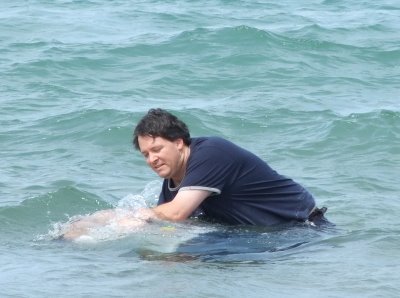 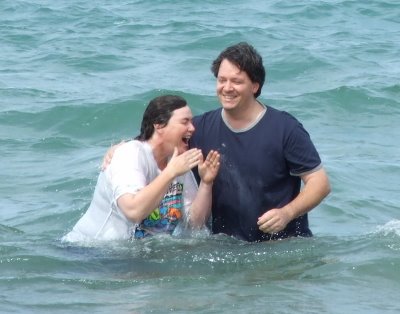 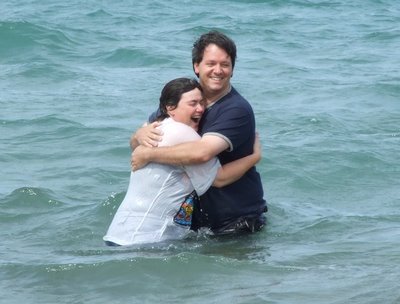 I will never forget what Linda said the first day we studied the Bible together.
She had been invited to come along by her work mate Sarah-Jayne, who was preparing for baptism. Linda was interested in what Seventh-day Adventists believed and decided to join us although she was suspicious of churches.
Having been introduced to Jesus some years earlier, Linda was told that Jesus was all she needed to be a Christian. Churches, she was told, may once have had contact with God. But now they were adrift at sea, having lost their way. She accepted Jesus and followed Him as best she could by listening to Christian music and reading the Bible.
So it was with some trepidation that Linda entered the church hall and sat in a sunlit corner with Sarah-Jayne and me. It wasn’t long into the conversation that Linda put her worries into words. Her eyes wandered around the brick room and in her quiet voice she reflected, “It just feels like churches put God in a box.”
The idea of having God in a box was a familiar one to me, but I had never considered church buildings as a visual representation of the limits we put on God. Was this how the world saw the church? Are we the ones with a small God? Are we naively keeping God locked in our jewellery boxes while the rest of humanity allows Him to roam free—unhindered and undefined?
Is this why denominations seem to race to build bigger and better churches—to demonstrate that my God is bigger than your God? Are the differing denominations like an after-school fight—churches facing up to each other with taunts and fists while the world stands by watching in amused disinterest?
Linda continued: “I find God in nature. I see Him in the bush. I see God at the beach. I don’t like putting God in a box. And sometimes I wonder, does God really limit Himself to the boxes we build for him?” Her eyes again surveyed the church structure, “Does He even enter them at all?”
My mind, which often wanders off the beaten path, visualised Aladdin’s Genie (in the Disney story) shouting to declare his “PHENOMENAL COSMIC POWERS!” before stuffing himself into his tiny lamp and whimpering, “itty, bitty living space!” Was this our God—a divine eternal being, stuffed into a box we rub once a week?
To Linda’s credit, she kept coming into the box, into my church, to hear me talk about my God. Sometimes it was about the God of the box; sometimes it was about the God outside the box. She came. She listened. She learned. And she looked to see if her very big God was in any way present in our little church.
Linda was invited to attend Jason’s small group. There she discovered something. The church wasn’t made of bricks and walls. The church was hearts and people. God’s church was God’s people. The walls just provided a place to meet, out of the weather, to experience community, friendship, family and to worship—together—as the people of God.
Linda had discovered the church. The true church. She saw past the walls and into the heart of the place—and there she saw the heart of God—His people. In her small group Linda discovered something about God’s people that she could relate to —really relate to! These people had questions. More questions than answers. Questions about life. Questions about God. Questions with answers. Questions without answers. Questions that led to vigorous discussion. Questions that led to thoughtful silence. Linda and her questions about God, and the box, had found a home.
I told this story one Sabbath afternoon a few weeks ago while standing on a beach as Linda’s small group, family and friends pressed around her. We all stood together on the sand as the wind whipped through our hair and the waves pounded at our heels.
After the story was finished, Linda and I turned and walked away from the crowd—into the surf. And there the story began anew.
Congratulations, Linda! May you continue to huddle against the elements of this world with your church family and may you never stop thinking outside the box.